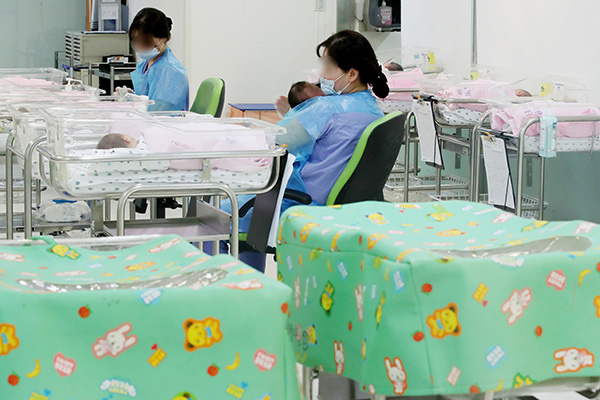 Anchor: A new World Trade Organization report projects a double-digit decline in South Korea’s working-age population by 2040, presenting yet another obstacle to national growth as the country works to cope with a fast-aging society, record low fertility rates and other demographic challenges.
Arius Derr has the details.

Report: The World Trade Organization(WTO) forecasts that South Korea’s working-age population will decline more than in any other country by 2040.

According to its annual World Trade Report released on Monday, the number of South Koreans aged 15 to 64 will plunge 17 percent over the next two decades.

This is the sharpest decline among major economies worldwide.

Neighbors like China and Japan, meanwhile, are both expected to see their labor force growth turn negative by 14 percent while Russia, which borders the Korean Peninsula to the north, may experience an eight percent shrinkage.

In stark contrast, the labor forces in Southeast Asia and India are projected to increase by 16 and 23 percent, respectively, much closer to the 17 percent average growth expected worldwide.

The future of South Korea's unskilled labor force appears particularly bleak. The report projects it to more than halve by 2040. The only other country approaching such a steep drop-off is Japan with a 36 percent contraction.

The report said as a result of the truncated workforce, South Korea's gross domestic product will expand 65 percent over the cited period, or 15 percentage points lower than the world average.

The negative outlook comes less than two weeks after the government revealed the number of babies born in the third quarter was just under 73-thousand-800, the lowest figure for any third quarter data on record.

Officials expect the country's fertility rate to be below one for a second straight year, among the lowest in the world.

The National Assembly Research Service assessed that South Korea’s working-age population peaked last year, and has expressed concerns about the ramifications such demographic changes may have on economic growth and society in the future.
Arius Derr, KBS World Radio News.
Share
Print
List