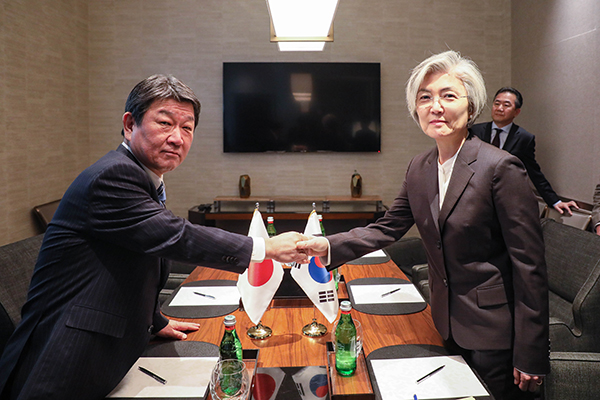 Japan reportedly holds South Korea accountable for the two countries' row over the wartime forced labor issue and requested Seoul resolve it during a meeting of their top diplomats in San Francisco on Tuesday.

Japan's Kyodo News said Wednesday Japanese Foreign Minister Toshimitsu Motegi reiterated the request he previously made when he and his South Korean counterpart Kang Kyung-wha met on the sidelines of a summit in Chengdu, China last month.

The ministers, meanwhile, agreed on the need to continue dialogue in seeking ways to settle the issue.

While Seoul said it respects the rulings from the country's judicial system, Tokyo argues all reparation issues were settled in the 1965 bilateral treaty normalizing Seoul-Tokyo ties.
Share
Print
List