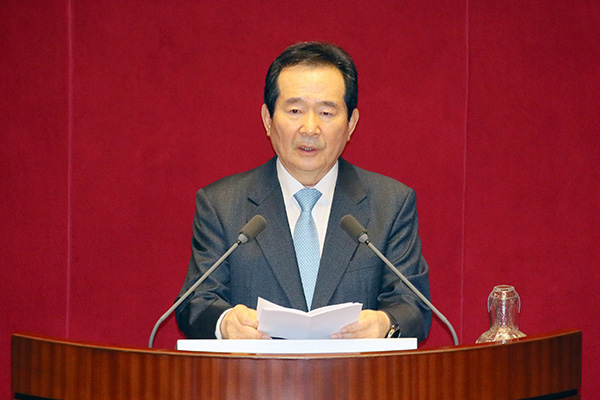 Prime Minister Chung Sye-kyun on Monday urged the parliament to swiftly pass the third extra budget plan to resolve the economic fallout of the COVID-19 outbreak, likening the current crisis to the Great Depression nearly a century ago.

He made the request in his first speech at the 21st National Assembly, which was arranged after the ruling Democratic Party proceeded to elect its nominees for key parliamentary committee chiefs despite the main opposition United Future Party’s boycott.

Chung called for the passage of the budget plan while noting the pandemic’s growing impact on the economy as well as job security and social safety net.

He also stressed plans to use the latest supplementary budget for Korean New Deal policies and highlighted the government’s efforts to restructure existing budget expenditures to reduce potential debts from financing the third extra budget.

The prime minister said he expected the timely fiscal injection will prime the pump for a V-shaped economic recovery and create a virtuous cycle in which overcoming the crisis leads to economic growth and eventually to restoring fiscal sustainability.
Share
Print
List