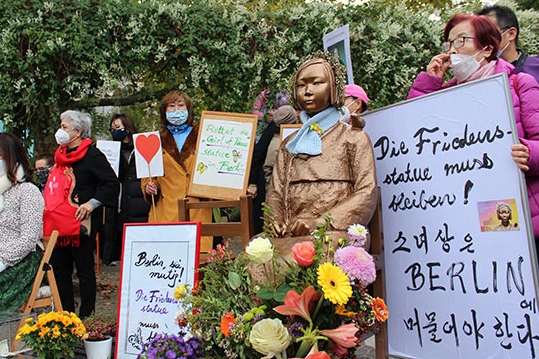 South Korea says a recent move by Japanese lawmakers to press for the removal of a girl statue symbolizing Korean victims of Japan's wartime sexual slavery does not help resolve the issue.

A Foreign Ministry official in Seoul said on Saturday that Japan's move to remove the statue that was voluntarily established by a private group for commemorative and educational purposes runs counter to the spirit of the apology and self-reflection, which Japan had expressed regarding the sex slavery issue.

The remarks came after Japan's Sankei Shimbun newspaper reported that lawmakers of the ruling Liberal Democratic Party have conveyed support to local authorities of a Berlin district regarding the dismantlement of the statue.

The lawmakers have reportedly sent letters to the administrative head and local assembly chief of the borough of Mitte in Berlin, expressing support for the district to revoke a permit on the statue.

The statue was erected in late September, but the Mitte district office issued an order last month for it to be taken down after Japan protested the installation.

Then, Korea Verband, a local civic group, filed a complaint with the court requesting a suspension of the order.

Authorities have then taken a step back, withholding a decision on the fate of the statue saying they will wait for the court to decide.
Share
Print
List