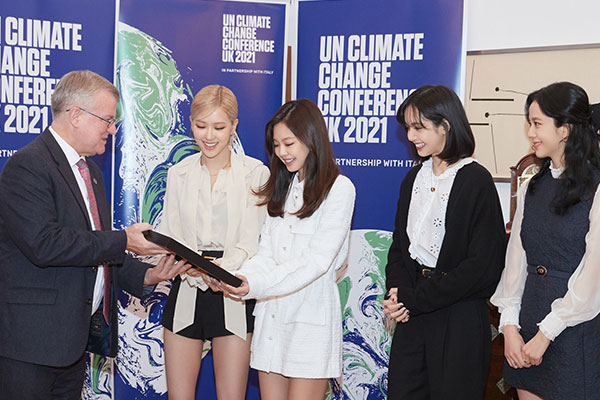 K-pop girl band Blackpink has been named goodwill ambassadors for the United Nations Climate Change Conference(COP26) to be held in the U.K. later this year.

According to the group's label YG Entertainment, the four singers were officially appointed as advocates for the COP26 in a ceremony held at the British ambassador's residence in Seoul on Thursday.

The four-member band was presented with a personal letter from British Prime Minister Boris Johnson in which he asked the K-pop superstars to help raise climate awareness alongside the U.K., the chair country of this year's conference.

In the letter, Johnson congratulated the band members on the success of their recent climate action video, noting that it has been viewed over ten million times across social media platforms.

He said climate change is the most important issue of our time and it's fantastic that Blackpink has chosen this moment to lend its voice to this critical issue.

The 26th session of the Conference of the Parties(COP26) to the UN Framework Convention on Climate Change is set to take place in Glasgow in November.
Share
Print
List