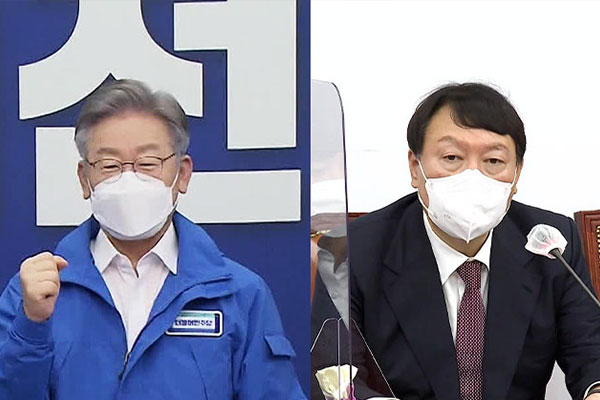 On the third and last day of his scheduled visit in the province, Lee visited a church in Jeongup for a Sunday service with his wife.

After the service, Lee headed to a traditional market and gave a speech calling for voters' support, stressing his competence as a presidential candidate.

He also targeted his rival Yoon Seok-youl of the main opposition People Power Party, saying that the prosecution regime is unacceptable as the military regime is. Yoon was prosecutor-general before he entered politics.

Lee plans to visit Wanju and Jinan on Sunday afternoon before wrapping up his three-day North Jeolla tour.

Meanwhile, Yoon held a meeting with PPP Secretary General Kweon Seong-dong to prepare for the launch of his election campaign committee set for Monday.

Yoon earlier said on social network that in the launch ceremony on Monday, he will show the party's unity along with the leaders of his election campaign committee – Kim Chong-in, Kim Byong-joon and Lee Jun-seok.
Share
Print
List