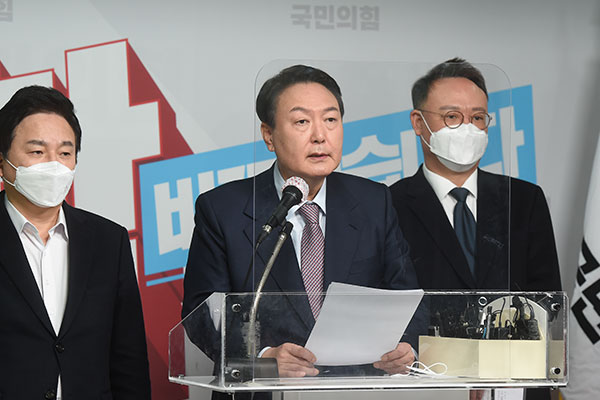 Yonhap on Tuesday quoted multiple PPP officials as saying that the candidate has decided to completely dissolve the election committee, which will result in the resignations of the remaining committee leaders, including general chair Kim.

Yoon is scheduled to hold a press conference on Wednesday morning to announce the result of his deliberations on overhauling the committee amid internal discord.

Conflicts between the candidate and the election committee head surfaced on Monday when Kim unilaterally announced his own plans to reform Yoon’s campaign, in which the committee will dissolve but he will remain and put the candidate under his direct control.

Many senior members of the committee resigned following Kim’s announcement, opening the door for the formation of a new committee. However, discontent was raised by members, including the candidate’s aides.

Under the reported plan, Yoon will dissolve the current election committee and create a new one without Kim. Four-term lawmaker Kwon Young-se was mentioned as a likely candidate to lead the new body.
Share
Print
List