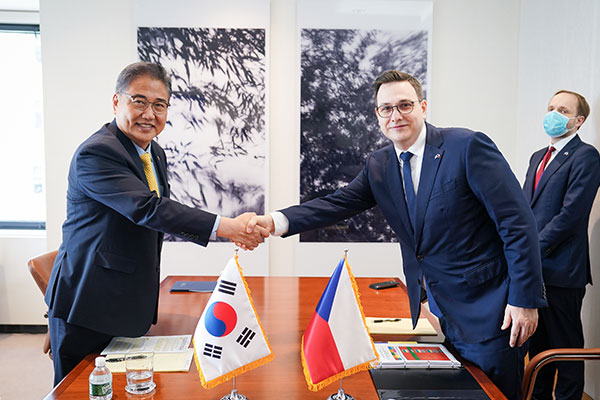 Foreign minister Park Jin held bilateral talks with his counterparts from Poland and the Czech Republic on the sidelines of the UN General Assembly in New York.

According to the foreign ministry on Friday, Park met with Czech Foreign Minister Jan Lipavský on Monday and discussed ways to boost bilateral cooperation in the fields of nuclear power plants, the defense industry, trade and investment.

Park asked that Lipavský take a keen interest in a bid by South Korean companies for a new nuclear power plant project in the south-central Czech village of Dukovany. A tender for the new unit to replace existing coal-fired plants was launched in March.

Lipavský, on his part, asked that South Korean firms actively invest in his country and expressed hope that their nations will expand cooperation in future industries, including electric vehicle batteries and artificial intelligence.

In a meeting with his Polish counterpart Zbigniew Rau that same day, Park stressed the need to cooperate closely to implement measures on nuclear power plants, infrastructure and defense industries as discussed by their leaders by phone in August