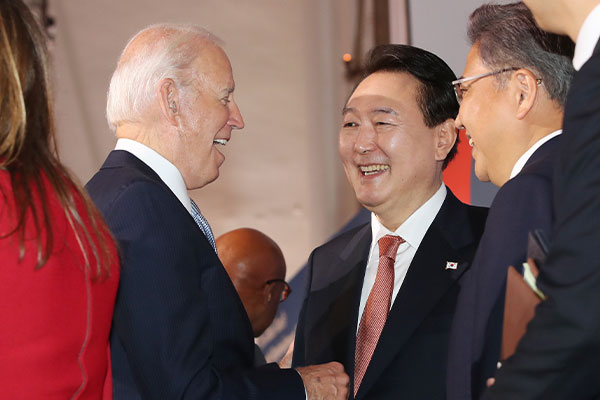 South Korea has offered an explanation to the United States on President Yoon Suk Yeol’s crude hot mic comment in New York that has generated controversy at home.

A senior government official told reporters on Monday that diplomatic authorities explained that the remarks made last Wednesday about a potentially embarrassing legislative loss, punctuated by profanity, were not about the U.S. in any way.

Following Seoul's explanation, the official said that the White House’s National Security Council(NSC) said it fully understood the situation and the remark did not cause any problems, noting that no explanation was ever requested by the U.S.

Elsewhere, South Korean Ambassador to the United States Cho Tae-yong reportedly contacted the NSC and repeated the explanation given by the presidential office the day after the incident asserting that Yoon was referring to South Korea's opposition lawmakers, while the South Korean embassy in the U.S. did the same with the U.S. Department of State.

Last Wednesday, Yoon was caught on video while speaking to foreign minister Park Jin and aides after a fundraising event in New York.

The following day, Yoon's senior secretary for press affairs, Kim Eun-hye, refuted the claims, saying that they were in fact about the opposition-dominated parliament in South Korea not approving Yoon’s funding pledge to the Global Fund.

She said that the word that was heard by others as “Biden” was in fact the Korean word “nalimyeon,” meaning “throwing out,” referring to the Korean parliament’s refusal to pass it.
Share
Print
List