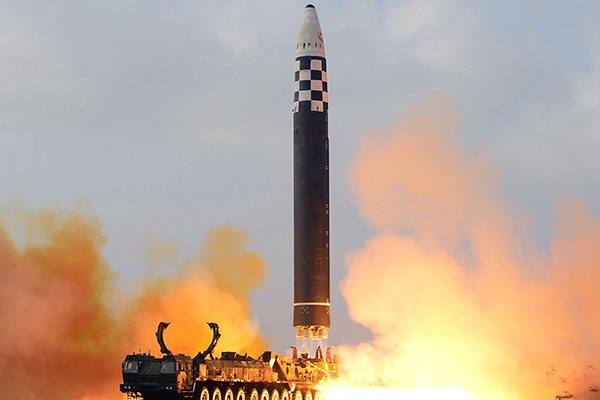 The Korean Central News Agency said Saturday that an ICBM test launch was conducted the previous day under the country's strategy to ceaselessly enhance absolute nuclear deterrence. It added that Kim inspected the launch on site.

The report said the firing was carried out under intolerable conditions where reckless confrontational moves by the U.S. and other hostile forces were driving regional security to the "red line."

Kim was quoted as saying that the launch reaffirmed the regime's acquisition of a powerful and reliable capability to counter any nuclear threat.

He also asserted that if U.S. imperialists continue the war drills and provide extended deterrence for allies, the North must demonstrate its strongest will to retaliate while its military response will only grow fiercer.

Kim also said it's necessary to show the U.S. and South Korea through action that military counteractions against the North will lead to their self-destruction and they should reconsider making wiser choices to improve the security environment.

KCNA also said that Kim came to the site together with his beloved daughter and wife, marking his daughter's first public appearance mentioned by state media.
Share
Print
List