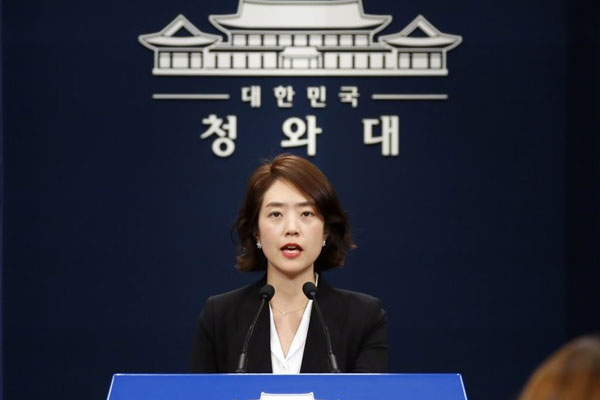 President Moon Jae-in sent a warning signal to the prosecution over its investigation of Justice Minister Cho Kuk.

Presidential spokesperson Ko Min- on Friday delivered in the wake of the prosecution's search of Cho's residence earlier this week.

"The prosecution must reflect on the reality of rising demand for reform despite its unhindered all-out investigation..."

The president was cited as urging restraint amid the ongoing probe into Cho's family.

During a parliamentary question-and-answer session on Thursday, admitted that he spoke with a prosecutor who raided his residence as his wife put him on the phone.

(Liberty Korea Party Rep. Kwang-: Did you speak on the phone with the chief prosecutor of the [raid] team when the prosecution raided your residence?)

Justice Minister Cho Kuk: "Yes. My wife was a bit shocked and called me, saying that there was a raid. So I asked for a 'calming down'."

"I asked him to help my wife find composure as she was not in a good physical or mental condition. I did not hinder the search or make instructions about the search."

denied suspicions that he attempted to influence the probe, but the latest revelations ignited another round of political wrangling over his qualifications.

Amid the spiraling controversy over his appointment, Moon also asked politicians to leave the probe to the prosecution and to focus on state affairs.