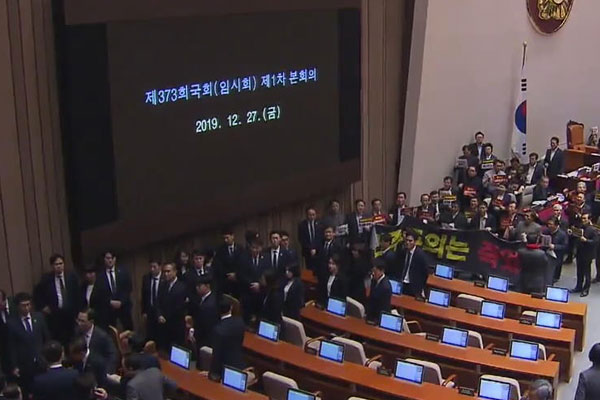 A controversial bill that would create an independent anti-corruption investigative body has been passed.

During a plenary parliamentary session that was declared open over 30 minutes past the initially planned time on Monday evening, a coalition of the ruling Democratic PartyDP) and minor parties passed the contentious bill 159-14 with three abstentions.

The vote on the fast-tracked bill was made after Assembly Speaker Moon Hee-sang exercised his power to restore order following protests from the main opposition Liberty Korea PartyLKP).

Under the bill, an agency will be created and tasked with investigating corruption allegations surrounding the president, lawmakers, the Supreme Court chief, the Constitutional Court chief, the prime minister, judges, prosecutors and other high-level officials.

Meanwhile, the prosecution has indicted dozens of ruling and opposition party officials for their involvement in a scuffle at the National Assembly last April over disagreements about the fast-tracking of the contentious reform bills.

The Seoul Southern District Prosecutors' Office said on Thursday it indicted without detention or summarily indicted a total of 37 lawmakers and officials from both the ruling and the main opposition parties.

LKP Chair Hwang Kyo-, Rep. Kyung-won and 22 other LKP lawmakers as well as five DP lawmakers face charges of obstruction of justice, violation of National Assembly laws and causing a disturbance at the parliamentary chamber.

Physical altercations involving over 100 lawmakers broke out last April in the midst of fast-tracking the reform bills by the DP and minor opposition parties despite fierce LKP objections.