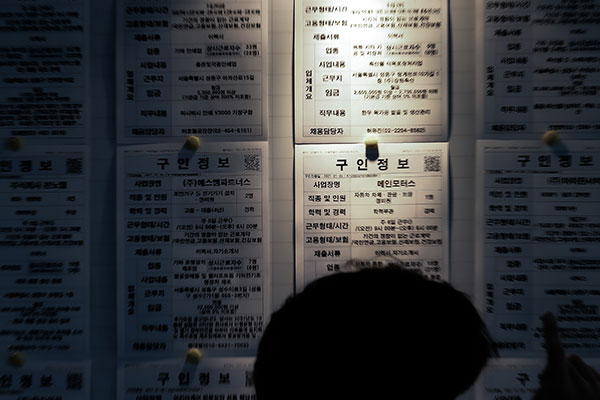 South Korea suffered its biggest monthly job loss in over two decades in January due to the fallout of the COVID-19 pandemic.

According to Statistics Korea on Wednesday, the number of employed people reached 25-point-81 million last month, down 982-thousand from a year earlier.

That's the largest drop since December 1998 when it shed one-point-28 million.

The nation has reported job losses for eleven straight months since March of last year, the longest decline after it posted losses for 16 months from January 1998 to April 1999.

The employment rate for those aged 15 and older slipped by two-point-six percentage points on-year to 57-point-four percent, the lowest figure for any January since 2011.

The number of jobless people soared by 417-thousand on-year to one-point-57 million last month, the largest since June 1999, when the nation started compiling related data.

Following the announcement, Finance Minister Hong Nam-ki said he cautiously forecasts an incremental improvement from the January jobs figures that showed the number of people without jobs had plummeted by 982-thousand on-year, marking the largest decline since the start of the pandemic.

The minister assessed that the employment shock was not only due to enhanced social distancing but also heavy snowfall last month and the base effect from strong employment data a year earlier.

Hong then pledged to prioritize maintaining existing jobs while offering new ones, such as creating at least 900-thousand jobs in the public sector during the first quarter.