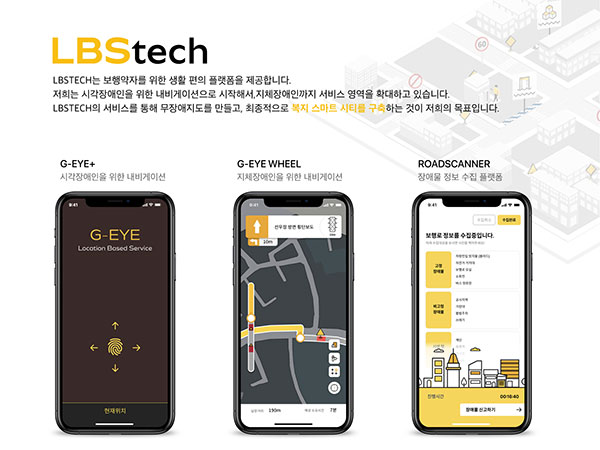 LBS Tech produces useful platforms that help blind people and the physically challenged move around, order things and pay in a more convenient way. Call taxis for those with disabilities usually drop off passengers at designated places so they can return home quickly. But other taxis might be different. I heard that a taxi dropped off a blind person just five meters away from the supposed location and the person wandered for three hours before getting home. In general, the location information might be nothing but it could be very critical for those with disabilities. So, I decided to create an easy-to-use app that helps them out.

Lee previously worked at large companies in Korea, such as Samsung, LG and Hyundai Motor. He ran his own business in Korea and in the U.S. as well. He would have been satisfied with his life, but he found himself hoping to do something more meaningful. That’s why he set up LBS Tech. While watching his blind cousin enjoying their smartphone, he analyzed the smartphone penetration rate for the visually impaired and the growth potential of the market.

He was convinced of the boundless potential of relevant services, considering that the market for 250 million blind people worldwide is estimated to be worth 50 billion US dollars. So, his company developed a location-based search app called “G-EYE.”

G-EYE tells users directions. If a user points in a certain direction, the app lets the person know which way he or she actually pointed. Second, the app saves the information about walking paths blind people have used before and informs them of the routes later. Third, the app converts written information into spoken words so the blind users can easily order things and pay at stores.

Based on user experience, G-EYE offers enhanced scalability, which is the most distinctive feature of this platform. On top of the existing location information, it also reflects various experiences of users, such as how fast they walked on average and how long and often they stopped to perceive things around them while walking. As a result, the app updates a map in a more precise and detailed way.

If blind people find easy paths, the paths will also prove convenient for users of wheelchairs and strollers. That means G-EYE can be used for various other purposes.

For those with disabilities, it is necessary to learn where the entrance of a building is. But it’s not easy to obtain such information. With our technology, it’s possible to identify the location of an entrance by simply taking a picture of it. In fact, it is illegal to access entrance information using building registers. But we’ve got special permission from the Ministry of Science and ICT and the Ministry of Land, Infrastructure and Transport to gain access to such information.

Speaking of obstacles, they are classified into fixed and non-fixed. Non-fixed obstacles are challenging. When it snows, for example, blind people might be in a dangerous situation, as they could slip and fall. But it’s hard to be aware of the danger because of their disability. In cooperation with the Korea Meteorological Administration, we’re working on tech capable of detecting this hazard, for instance, by automatically identifying which regions are slippery when it snows, in order to ensure the safety of people with disabilities. This feature clearly differentiates our service from others.

LBS Tech’s business model represents something more than just an app for those with disabilities. Its smart city consulting service, designed to promote the convenience of socially vulnerable groups, makes a significant portion of the company’s profit. It does not see the blind as those in need of help but helps them participate in society as an economic player. In recognition of its work and dedication, the company has won various prizes awarded by ministers as well as the presidential prize at the 2018 public data utilization contest. It has also carried out pilot smart city projects for Magok, western Seoul, and for Sejong City. 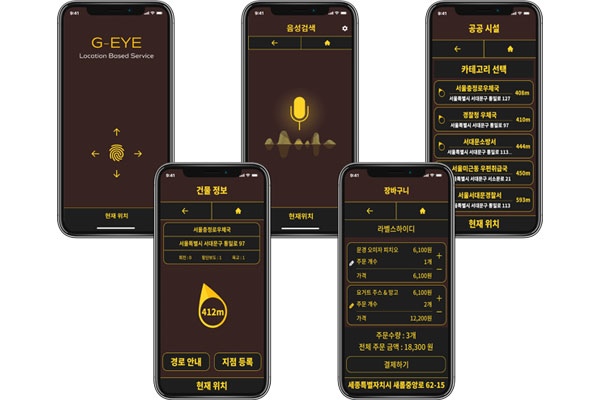 We’ve provided a smart city service on a trial basis in Sejong City. Blind people, in general, find it difficult to use coffee shops. But a new system that guides them to coffee shops safely, enables them to order coffee conveniently and allows coffee shops to take their orders will revitalize the regional economy. In that case, coffee shops are said to be able to increase their sales by more than 20 percent. A survey of blind people shows that all respondents want to go out rather than stay at home. Even if they have purchasing power, they have few opportunities to spend money. By enabling them to consume more, we can create a healthier consumption pattern. I think this is a useful service for the disabled and for the economy as well.

LBS Tech plans on exploring overseas markets as well. A few years ago, Denmark, Finland, the U.K., Thailand and Vietnam proposed working with the Korean firm to establish precise map service infrastructure for general users as well as blind people. As its technology and potential have already been recognized in Korea, the company is confident about its success in the international market.

In a sense, our service can be regarded as a tool for the disabled to engage in social activities. Smart cities are being built around the world, but for those with disabilities, it is challenging even to use basic services in existing cities. The city we’re envisioning is easily accessible to people with disabilities. We call it a barrier-free city. We’re working on building a barrier-free, smart city with improved accessibility and usability.

While resolving social issues and establishing a sustainable business model, LBS Tech is emerging as a model of a successful startup. Thanks to the company, a real smart city that makes no distinction between disability and non-disability is becoming a reality more quickly.