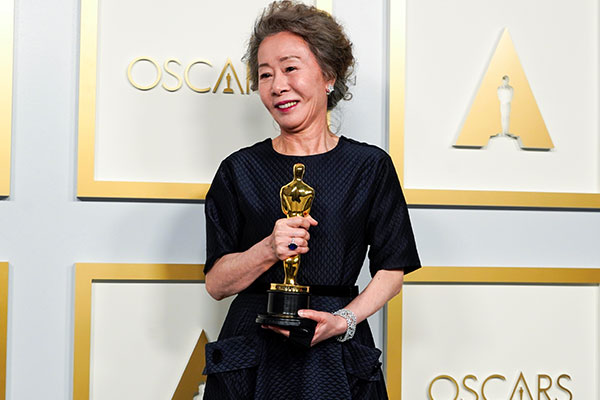 Youn Yuh-jung made history on Sunday night in Los Angeles, becoming the first South Korean to win an acting award at the Oscars. Unfortunately, it was the only win of the night for her film “Minari.”

South Korea's Youn Yuh-jung has won the best supporting actress at the Oscars for her role in “Minari".

“Okay, let me pull myself together. Thank you for the... tremendous thanks to the Academy members who vote for me.”

During the 93rd annual Academy Awards ceremony in Los Angeles, the 73-year-old actress was declared the winner over her four other competitors - Maria Bakalova of “Borat Subsequent Moviefilm,” Glenn Close of “Hillbilly Elegy,” Olivia Colman of “The Father” and Amanda Seyfried of “Mank.”

"Okay, thank you for the... (Laughter) Wonderful 'Minari' family - Steven, Isaac, Yeri and Noelle, Alan. We became a family. And most of all, above all, Lee Isaac Chung. Without him, I couldn't be here tonight."

Youn spoke to her fellow nominees, saying that she didn’t believe it was a competition and more like they all won for different movies and she happened to get lucky.

"... so this is just, all the nominee, the five nominees, we are the winners for different movie. We play different role. So we cannot compete each other. So tonight I'm here is just, I have a little bit luck, I think. Maybe. I'm luckier than you. And also maybe American hospitality for the Korea actor? I'm not sure. But, anyway, thank you so much and... ah, I'd like to thank to my two boys, who made me go out and work."

Youn made history, becoming the first South Korean actor to win an acting Oscar and only the second Asian actress to win such an award. She made her acting debut in 1967 in the television drama "Mr. Gong," though she is known for her roles in "Woman of Fire" (1971), "The Handmaid" (2010) and "The Bacchus Lady" (2016).

"Minari" is a semi-autobiographical film directed by Lee Isaac Chung about a Korean immigrant family settling in rural America in the 1980s.

It was nominated for five other Oscars - Best Picture, Best Director, Best Original Score, Best Original Screenplay and Best Actor. Youn’s award for best supporting actress was the only award the film won.

Chloe Zhao's "Nomadland" won Best Picture and Best Director, while Anthony Hopkins picked up the Oscar for Best Actor in a Leading Role.