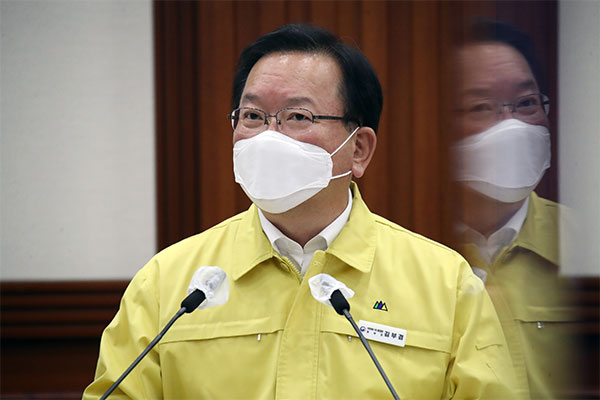 Amid a continued spike in COVID-19 infections, Prime Minister Kim Boo-kyum has expressed concerns that the nation may have to halt its transition into a more normalized daily life if it fails to tackle the current crisis.

The prime minister made the remarks on Friday during a meeting with hospital chiefs in the capital region -- which is seeing a spike in critical cases of COVID-19, with 8 in 10 ICU beds filled in Seoul alone.

Kim noted a surge in cluster infections at nursing homes and among fully vaccinated people, especially senior citizens. He said, compared to last month, the number of daily infections has jumped by nearly 30 percent since the nation began the transition on the first of this month.

The prime minister said the government will support efforts to secure more hospital beds while providing the medical resource support needed at hospitals.

-Interval between Vaccination, Booster Shots Shortened to 4 Months for Elderly

The government has decided to shorten the minimum interval between COVID-19 vaccination and booster shots for senior citizens aged 60 and older and nursing home patients from the current six months to four, and to five months for those in their 50s.

Prime Minister Kim Boo-kyum said on Wednesday that the government made the decision to shorten the intervals, citing the urgent need to prevent infections among vaccinated people.

The prime minister said that, with the latest decision, about 13-point-78 million people are expected to receive additional shots by the end of this year, which is more than double from the original plan.

People Younger than 30 Advised to Get Pfizer Vaccine over Moderna

Those who are in their 20s and younger are being advised to take the Pfizer vaccine instead of Moderna from here on out.

In a Wednesday briefing, the state vaccine task force said - while the country has not seen a big difference in the two vaccines in regards to reports of heart conditions - it is making the preemptive recommendation in the interest of protecting the safety of those in the age group.

Those younger than 30 who have yet to be inoculated are advised to receive Pfizer for both shots, while those who already received Moderna for their first jab will get the Pfizer for their second. As for boosters, Moderna still stands, as only half the primary dose is administered.

The task force also said the AstraZeneca vaccine will be gradually phased out by the year-end.

Also moving forward, health authorities will use a five-tiered system to gauge the country’s risk level for COVID-19 -- as they decide whether to continue or suspend the gradual transition to a more normalized life.

Health authorities on Wednesday said the system of very low, low, medium, high and very high will be determined based on expert advice as well as on 17 indicators in the areas of medical capacity, infections and vaccination… including ICU bed occupancy, the healthcare system's response capacity, weekly critical cases, number of seniors among new infections and booster shot rates.

In line with the risk assessment, the Central Disease Control Headquarters will also consider input from a pandemic transition committee in making a final call on whether or not to continue with the next phase of transition or to trigger emergency measures.