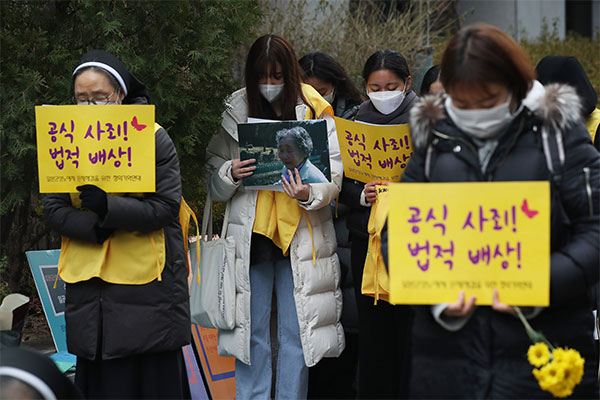 A weekly protest held nearly every Wednesday by the former Japanese Embassy site in Seoul demanding a resolution of Tokyo's wartime sex slavery marks its 30th anniversary this week.

At the one-thousand-525th rally, protesters cried out they will continue to gather until the issue is resolved. They criticized right wing factions who deny history and attack them with hate speech.

The Korean Council for Justice and Remembrance for the Issues of Military Sexual Slavery by Japan, the gathering’s organizer, on Wednesday looked back at the past three decades, saying it has been an unbelievable journey and a time of communication, understanding and education.

The council said the Japanese government has yet to apologize, while forces who deny history continue their denials and distortions.

Around 40 photos are also on display to mark the anniversary as some surviving victims delivered video messages.