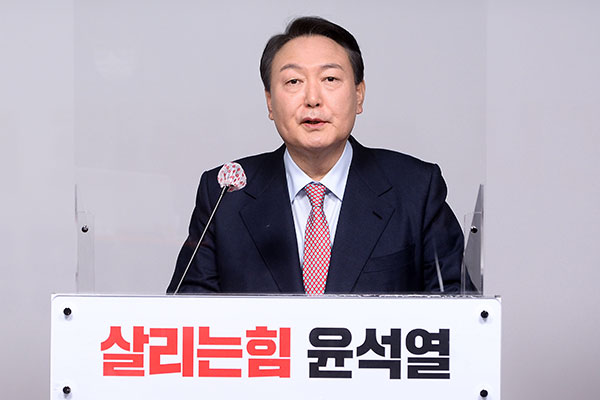 After dedicating two days to deliberate the future of his presidential campaign, Yoon broke his silence on Wednesday. He announced in a press conference the election committee would be replaced by a streamlined election headquarters made up of young and talented hands-on staff.

The new headquarters will be led by four-term lawmaker Rep. Kwon Young-se, with the remaining appointments to be announced on Thursday.

The overhaul includes the departure of election committee chief Kim Chong-in, known as the "kingmaker," just 33 days after he had come on board.

Kim on Monday had unilaterally announced intentions to restructure the election committee, citing the need to align with public sentiment, in an apparent surprise move for the party's presidential nominee.

At the press conference, Yoon thanked his former committee general chairman, who resigned prior to the announcement, adding that he had asked Kim for continued advice during a phone call that morning.

Yoon also took full responsibility for failing to win public trust in his leadership of the party and the election committee, and promised not to cause concern over close aides exercising influence on committee affairs.

Apologizing over allegations surrounding his wife and mother-in-law, the candidate pledged to apply the same principles and standards he's consistently held since he was a prosecutor to his family.

A number of participants of a closed-door general meeting of PPP lawmakers on Thursday quoted Senior Deputy Floor Leader Choo Kyung-ho as saying that the time has come to make a decision about Lee.

Rep. Thae Yong-ho then proposed seeking his impeachment through a secret ballot.

Yoon and Lee managed to reconcile on Thursday and put an end to a month-long dispute over election strategies.

The party held a general meeting of its lawmakers at the National Assembly on Thursday to adopt a resolution demanding the chairman's resignation. But it withdrew the plan as Lee and Yoon came to an understanding.

The presidential candidate made a surprise appearance at the meeting at around 8 p.m. as Lee was speaking. Yoon and Lee agreed to join forces to win the election and embraced.