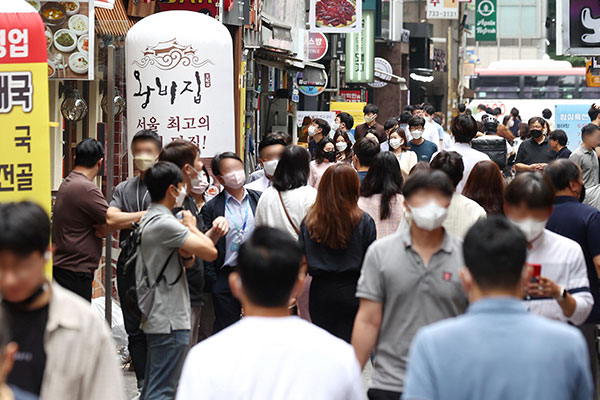 The South Korean economy grew zero-point-seven percent in the second quarter from the previous quarter thanks to a recovery in private consumption with eased social distancing measures.

The Bank of Korea on Tuesday issued the quarterly estimate on the country's gross domestic product(GDP) for the April-to-June period.

The zero-point-seven percent growth represents a rise of one-tenth of a percentage point from the previous quarter.

The on-quarter growth rate posted a gain for the eighth consecutive quarter.

The central bank said its annual growth target of two-point-seven percent will be achieved if the economy logs an on-quarter growth of zero-point-three percent each in the third and fourth quarters.

Private consumption increased on-quarter by three percent in the second quarter while facility investment decreased by one percent.

Also on Tuesday, the International Monetary Fund(IMF) cut its economic growth outlook for South Korea for this year to two-point-three percent.

The organization issued a revised outlook for some 30 major countries, in which it marked down its forecast for Asia’s fourth largest economy by zero-point-two percentage points from three months ago.

The downward revision appears to have reflected the potential impact of a slowing global economy on the nation’s export-driven economy.

Citing such concerns as inflation, China’s slowdown, Russia’s invasion of Ukraine and COVID-19, among other factors, the IMF also lowered its global economic growth outlook this year to three-point-two percent, down by zero-point-four percentage points from April.

Growth forecasts were slashed for many other advanced countries, including the U.S., which is now expected to grow two-point-three percent this year, compared to a forecast of three-point-seven percent in April.