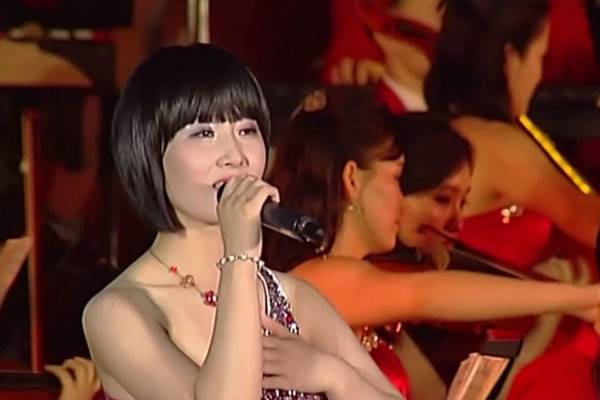 In a major shift from the past, North Korea has reportedly discovered new talent in the movie, TV series and performing art scenes this year, signaling a generational shift in local culture and art. Some speculate that this trend may lead to an overall change in the country’s key policy toward the culture and art sector, which has remained stagnant.

North Korea celebrates the anniversary of the signing of the Korean War Armistice Agreement on July 27, 1953, as “Victory Day.” On this year’s occasion, the country held a commemorative event in front of the Monument of Victory in the Fatherland Liberation War Museum in the capital of Pyongyang.

The performance with a lineup of new singers drew special attention, starting with Mun So-hyang.

The most eye-catching singer was Chung Hong-ran wearing full bangs.

Kim Ryu-kyong appeared, as a student, on a propaganda video promoting Pyongyang’s prestigious Kim Won-gyun Conservatory released by North Korean social media last year. Except Kim, nothing is known about other new singers.

The singers attracted attention with their fabulous clothes and makeup as well as unusual hairstyles, which clearly distinguished them from existing singers.

The audiences were captivated by the great performance of young and beautiful singers dominating the stage. In North Korea, hairstyles featuring bangs are very rare. Also, most North Korean women have thick, arched eyebrows. But the new singers had thin, straight eyebrows—a style adopted by many South Korean women. Until a few years ago, the South Korean-style straight eyebrows were subject to crackdowns in the North. But today, the makeup style seems to be easily accepted. Speaking of stage costumes, the North Korean performers showed quite an unconventional style to expose the upper part of their body. Indeed, the new female singers breathed new vitality into the stage.

With international sanctions and the pandemic-induced border shutdown deepening economic difficulties, North Korea held the performance in an apparent attempt to dispel public distrust in the government and divert people’s attention to something else.

North Korea unveiled a new film titled One Day, One Night in April. It is the country’s first art film in six years since the release of the 2016 flick, A Diploma of Graduation. One day, One Night is based on a real person named Ra Myong-hee, a female war veteran and army nurse, who lays bare a plot by a high official to betray the country. After the movie’s premiere, the North’s state-run Korean Central TV aired its trailer and released it nationwide, timed with the film screening week marking the April 15 Day of the Sun, the anniversary of the regime’s founder Kim Il-sung’s birth. In North Korea, it is very unusual to see such big media hype for a movie.

The trailer’s editing is highly stylish and refined. In the beginning, the film depicts the leading male and female characters in a stationary state using the “time slicing” technique. The technique enables multiple still cameras to capture the subject simultaneously from various angles and produces moving footage using the computer to connect the photos. Also, the use of two contrasting concepts, such as stillness and movement, light and dark, and cheerful background music and suspenseful sound effects, arouses viewers’ curiosity.

North Korean media highly praise this film, saying its theme, format and details were perfectly completed to create a masterpiece. That is, the film achieved “innovation” both in form and content.

Another notable part is that a new actress played the lead role in the carefully-crafted movie.

Not much is known about the new actress who took on the role of the heroine. It is difficult to get information about North Korean movie directors, actors or screenwriters unless local media introduce them, so we may have to wait for some time until relevant information is disclosed.

Existing actors and actresses show typical and formulaic acting, so they stop short of serving as icons of innovation. Famous movie stars who are well-known among the public are usually characterized by their own particular image that has been built in previous films. But the image of rookies does not overlap with the one in existing films, and they can create an image required for new movies.

Not only in movies and performing arts, new faces have appeared in TV series as well.

A recently-ended television drama The Last Unicorn portrays the life of North Korean table tennis star Pak Yung-sun, who won the 1975 World Table Tennis Championships in Calcutta, India. The role of the heroine was also performed by a new actress named Ri Hyo-sim.

In the North Korean film scene, where acting career and years of experience are highly valued, it is very rare for a new actress to take the leading role.

In the TV series, the role of Pak Yung-sun(박영순) was performed by 14-year-old table tennis player Jang Eui-kyong(장의경) and 22-year-old actress Ri Hyo-sim(리효심). Jang attends a sports school in Pyongyang and Ri is a student at Pyongyang University of Dramatic and Cinematic Arts. Ri was not good at table tennis, so she received training at a professional sports club. It is said that Pak had superior skills as a left-handed player. Right-handed Ri made strenuous effort to master the skills for left-handers.

In the TV series, 19-year-old Pak pulls off an upset at the quarterfinals of the World Table Tennis Championships and grabs the gold medal at last. None of experienced actresses can play the role of a 19-year-old athlete. A new actress was needed to describe the touching story of the young athlete winning the world championships. That’s why the production team selected a new actress filled with ambition and enthusiasm, who is willing to receive hard training.

The North Korean movie scene has seen conspicuous actresses in each period. One such actress is Mun Ye-bong.

Mun defected to North Korea after Korea’s liberation from Japanese colonial rule. She appeared in a number of movies, including the first North Korean feature film, My Hometown, to play an important role in laying the groundwork for the local film industry.

Another actress Oh Mi-ran found favor with former leader Kim Jong-il, thanks to her ability to express emotions in a delicate way. She enjoyed great popularity among the public with her 1987 film A Broad Bellflower and won the award for best actress at the first Pyongyang International Film Festival that year.

Many new actresses have appeared in the North Korean film scene that had formerly been dominated by experienced movie stars. Actress Paek Sol-mi, who was cast for the leading role in the 2016 movie, The Story of Our Home, earned huge popularity.

Based on a true story, the film revolves around a young girl who looks after orphan siblings in the neighborhood right after she graduates from middle school. The director of the movie is said to have put a great deal of effort into selecting the leading actress, who turned out to be Paek.

Paek drew a lot of attention even before the release of the film. For better acting, she actually lived with children in a house that provided the motif for the film. The Story of Our Home won the Best Film Award at the 15th Pyongyang International Film Festival in 2016, and Paek also received the prize for Best Actress. The movie was later entered at the Moscow International Film Festival. It was even screened in South Korea in 2018. Paek was able to make herself known to global audiences in a very short period of time.

Amazingly, Paek rose to stardom with her debut film. In an interview with local media, Paek said that she was stunned by her sudden popularity.

It is said that relationships between celebrities and fans in North Korea are much different from South Korea’s.

Of course, North Korean fans may send letters to their favorite singers, actors or actresses. But it is difficult to create the so-called fandom culture in North Korea. Still, many people imitate makeup and fashion styles of celebrities they adore, so stars in North Korea may wield as much influence as in a capitalistic society. Calendars featuring the image of the celebrities are sold out immediately. It is little wonder that people show keen interest in new faces or new films. The story of new songs or movies spread quickly through word of mouth.

So, why have new entertainers appeared one after another in the North Korean culture and art scenes, where it was hard to find new talent for some time? North Korea strictly regulates foreign videos, including those from South Korea. In this situation, the North seems to be trying to quench people’s thirst for cultural content. Perhaps, North Korea believes the use of new entertainers is effective in satisfying young people who are already familiar with outside culture.

New celebrities may become icons of innovation that show new form and content. It costs a lot to invest in technology and equipment. But by using new entertainers, North Korea could divert public attention at relatively low costs and also invigorate the culture and art industry.

But it remains to be seen whether the new faces will actually lead to a tangible change in North Korea’s culture and art policy. If they repeat the same old practice, they will simply end up replacing old faces and the change will be only a temporary phenomenon. But if they seek something new or bring about a real change, it will serve as a factor that overhauls the country’s cultural policy.

We’ll have to closely watch whether the latest wind of a generational shift in North Korea’s culture and art scenes will lead to a meaningful change.