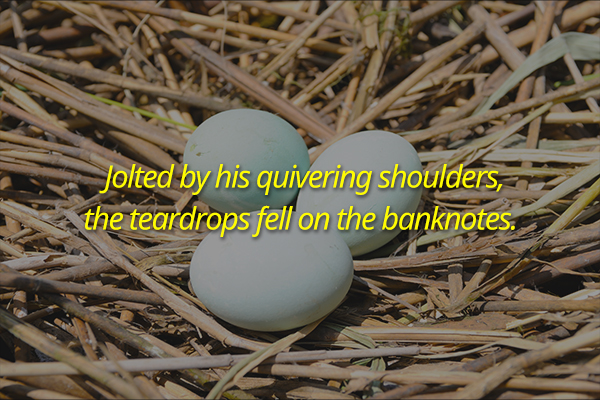 Man-geum cried when he heard his teacher’s plea to help the children who lost their parents during the war.

He believed their plight was more dire than his own. He had lost his father, sister and their family home during last summer’s flood, leaving only his mother and himself to fend for themselves.

His 100-hwan monthly tuition was already overdue, but he sincerely wanted to donate 50 hwan for the war orphans. After hearing about the fundraiser, Man-geum’s mother wanted to come up with the money but couldn’t.

He felt around to discover that there wasn’t just one, but three eggs. He suddenly hit upon an idea that these eggs could fetch at least 50 hwan if they were sold at the market.

‘This is a crime. It’s a crime to steal someone else’s stuff.’

Man-geum repeated this admonition in his mind and tried to leave the eggs behind, but he was soon haunted by the vision of starving war orphans. They seemed to swarm him and hang onto his shoulders, begging to be saved. Before he knew what he was doing, he already held those three duck eggs in his shaking hands.

Man-geum must have experienced many different emotions and internal conflicts as he took those duck eggs and sold them at the market. Out of guilt, he donates all the money he got from selling the duck eggs. Man-geum’s inner conflict and behavior demonstrate the cruelty of the period when a good person cannot even help others through a moral and legal means.

The author shows through this conclusion that the time was very paradoxical, because the person who should be condemned was not Man-geum, but grownups like the town official. Because of the official’s scheme, Man-geum had to resort to stealing in order to help others. Although his intentions were good, Man-geum was denounced for his actions and had to experience a heartbreak and humiliation. This scene represents the sad absurdity of altruistic people getting punished instead of selfish and greedy people.

The teacher took out 60 hwan from the drawer and threw the money down on the desk.

“Don’t you dare do such thing again. You buy back the duck eggs and take them to the official’s house right now.”

The moment his teacher pushed the money toward him, Man-geum couldn’t hold back the tears anymore. Jolted by his quivering shoulders, the teardrops fell on the banknotes.

“Take the money and get out!”

Man-geum silently took the money in his shaking hands.

He felt his heart break as he remembered the array of emotions experienced when he had received the money in exchange for the duck eggs last night.

Debuted with short story “Payback” in 1925