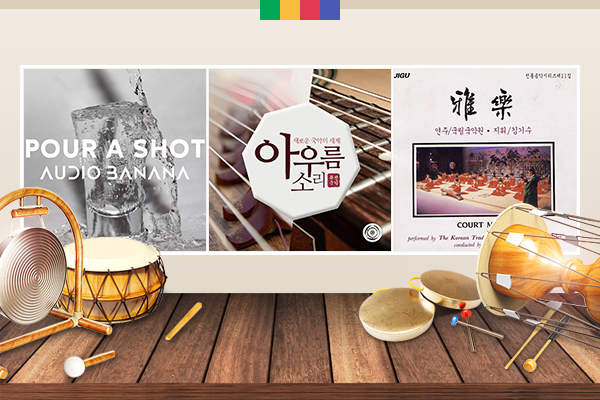 Seol, the lunar New Year’s Day, is just around the corner. Koreans used to say that you grow a year older only after eating ddeokguk떡국, rice cake soup, on Seol. In the old days, there was another food custom shared among families – drinking alcohol called dosoju도소주 together. Dosoju is made with several kinds of medicinal herbs, rendering it healthy and fragrant. It is also sweet and delicate enough for even a young person to enjoy. Since medicine was scarce in the old days, people wished good health throughout the year by sharing alcohol made with medicinal ingredients on the first day of the year. The ingredients were typically kept submerged in a communal well so that people who couldn’t make their own sodoju would still be able to stay healthy by drinking the well water steeped with medicinal herbs. Today, we’ll begin with fusion band AudioBanana singing “Pour a Shot.”

Pour a Shot/ Sung by AudioBanana

It is an old practice to drink dosoju on the morning of Seol. Young people drink it first, followed by old people.

It is customary in Korea for young people to wait until older people start eating and drinking. But it was opposite in the case of dosoju. The reason young people drank dosoju first was because people cared more for the health of young ones. Through such practice, young people were taught how to drink alcohol properly. Enjoying alcohol this way suggested that the family members cared for one another, which would surely have made them healthier in body and mind.

Shim Su-gyeong also wrote the following at the end of his writing.

So many people drink dosoju ahead of me, which made me realize that I’m old and decrepit, so I gave up my big aspiration.

It must have been sad to realize one’s old age by seeing how many young people drank dosoju ahead of you. Shim Su-gyeong tried to say knowing when to discard one’s desires is one way to live happier in one’s later years.

Coming up next is “Maehwaga매화가,” or “Song of Plum Blossoms,” which starts with the sadness of growing old.

You could have flowered on the branches that bore you before

But spring snow comes and you don’t know whether to bloom or not.

Today’s “Song of Plum Blossoms” is sung by Lee Yun-jin.

MC: Between the first day of January and the fifteenth day when the year’s first full moon rises is said to be the period with the most number of seasonal customs. There were many dos and don’ts for the start of a new year. The dos usually involved behaviors that wished for good health and well-being, such as drinking dosoju and jisinbalgi지신밟기, or Earth God Treading, a ritual that aims to keep the benevolent earth gods at one’s home by appeasing them with music and prayers. Rural and fishing villages held shaman rituals to wish for a bountiful year. The last music piece for today’s Sounds of Korea is “Gyeongpungnyeon경풍년,” which means celebrating a plentiful year. This music, performed when food was served at royal ceremonies, congratulates the year’s harvest which is assumed to be abundant. It is traditional to give new year’s blessings on the assumption that good things have happened. For instance, you don’t say, “I wish you would get a good job.” You should instead say, “How great that you got a good job.” This would give you a chance to think about how to give blessings to your loved ones without offending them or making them worry. Here’s the National Gugak Center’s Court Music Orchestra performing “Gyeongpungnyeon” to wish you a year filled with joy and peace.