Gueum, a way of studying music 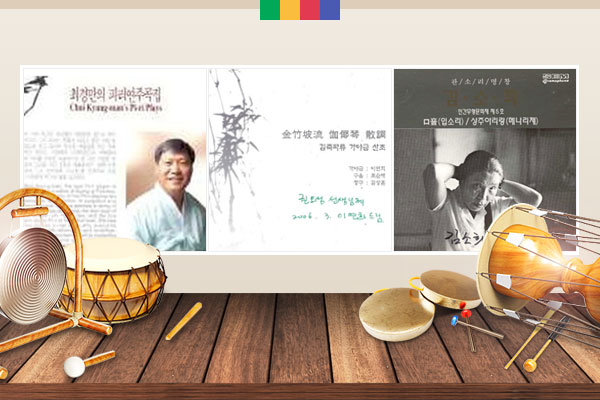 Korean traditional musicians had a unique way of teaching their art. It’s called “gujeonsimsu구전심수,” which means transmitting through the mouth and teaching through the heart. This approach is quite different from the present-day teaching method which entails reading sheet music and learning how to play an instrument. The traditional way involved a teacher singing a melody and a student playing that tune with the instrument. The tune that teacher makes to mimic the sound of an instrument is called “gueum구음,” which contains a wide range of musical information such as cadence and playing style. Once a student comprehends gueum well enough, the student can practice by oneself without the teacher. Interestingly, each instrument has its own unique gueum. String instruments like the gayageum가야금 or geomungo거문고 are taught with gueum sounds as dang당, dong동, zing징, seulgidung슬기둥, ddeul뜰, etc. The daegeum대금 and other wind instruments use such sounds as na나, nu누, neo너, no노. Still, you may wonder how anyone can teach instrumental music with such sounds. So here is a piri gueum piece called “Daepungryu대풍류” to show you how it’s done.

The word “pungryu” in “Daepungryu” means, among many things, music. The term “julpungryu줄풍류” means string music and “daepungryu” means music made with a bamboo instrument, that is, a wind instrument. Coming up next is a gayageum sanjo piece performed with gueum.

The term sanjo, which literally means ‘scattered melodies,’ refers to a free-style instrument solo and usually classified by the person who created a unique jangdan or rhythm. An example would be called a ‘musician’s name-style’ sanjo.

Today we’re going to listen to a Kim Juk-pa김죽파-style gayageum sanjo. Master musician Kim Juk-pa is the granddaughter of Kim Chang-jo, the creator of gayageym sanjo. She completed her own style of sanjo by adding her own melodies to the ones developed by her grandfather. The gueum was done by master-singer Cho Soon-ae조순애, who enjoyed fame as a renowned pansori singer during the 1950s. Pansori and sanjo have a similar musical foundation, so a pansori singer can reenact the beauty of sanjo with his or her voice. Cho Soon-ae’s husband was the famed drummer named Kim Dong-joon김동준, who often accompanied his wife in concerts to lend an energetic beat to her music. Let’s enjoy the hwimori part of Kim Juk-pa Style Gayageum Sanjo performed with Cho Soon-ae at gueum and Lee Yeon-hee at the gayageum.

As mentioned before, gueum refers to mimicking the sound of an instrument with a human voice. You’ve just experienced how a human voice can produce music just as beautifully as any instrument, which is why human voice is said to be the greatest musical instrument of all. This is also why some sinawi시나위 performances, non-standardized shamanistic instrumental music, invite singers, instead of actual instruments, to perform gueum. The lyrics in such gueum pieces are comprised of just basic vowels like “a아” or “eo어” or “eu으.” Perhaps this lack of specific words gives these gueum pieces a more personal resonance or more room for interpretation. The gueum sinawi pieces are also used as accompaniments for salpuri dances, performed to ward off evil spirits as well as for listening pleasure. Today’s Sounds of Korea concludes with Kim So-hee’s “Gueum” accompanied by Kim Duk-soo’s Samulnori.