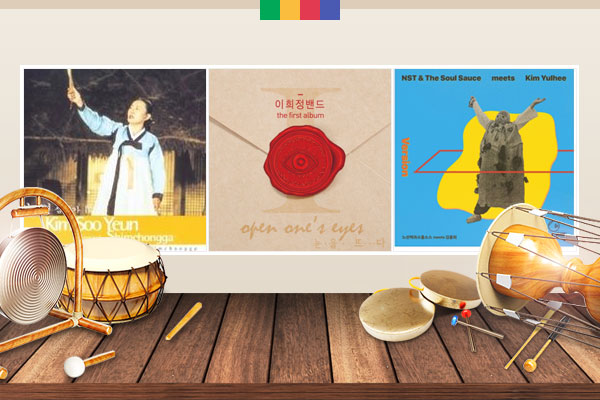 Pansori singers in the old days used to think there were different levels of pansori. “Jeokbyeokga적벽가,” inspired by the Chinese classical literature “Romance of the Three Kingdoms,” was considered the classiest pansori piece, while “Simcheongga” didn’t rank very high on the list, because the story was filled with misery and pain. The story starts with Simcheong’s mother dying after giving birth to the baby girl. Until the plot ends with Simcheong returning as an empress and her father regaining his eyesight, various hardships overwhelm the main characters, prompting the audiences to tear up from sadness and frustration. But there is one part where the singer and audience can laugh out loud and that is the part where Bbaengdeok’s mother makes appearance. After learning that his daughter sacrificed herself to save him, Simcheong’s father was wallowing in tears out of the guilt that he had driven his daughter to her death. The person who approaches him is Bbaengdeok’s mother, who aimed to take the money given by the sailors in return for Simcheong’s life. Here is the description of the character of Bbaengdeok’s mother.

She is a big eater, heavy drinker, meat and ddeok lover.

Judging from this description, she appeared to be a person of voracious appetite. She was also a shameless person with no sense of honor and integrity. Here’s Kim Su-yeon singing the part from “Simcheongga” that lists her improper behaviors.

Bbaegdeok’s mother cussed, ground her teeth when sleeping, bum cigarettes from passers-by and yelled ‘fire’ when newlyweds were sleeping. She was, in essence, a wicked person. Simcheong’s father ended up living together with her, because he was unaware of her bad reputation. She ended up spending all his money on food and eloped with another man when she and Simcheong’s father were going to a big party for blind people. Simcheong’s father became helpless when he was abandoned by himself at an unfamiliar place. That was how vile and disloyal Bbaengdeok’s mother was. The pansori doesn’t say why she became so brazen, so different from the notion of a demure Joseon-era woman. Perhaps she was not a character important enough to merit any further narrative, but we can always make a guess so here’s our speculation on what had shaped her personality. In the Joseon period, widowed women had to remain chaste until they died and couldn’t even get outside jobs. If you were lucky enough to be born into a noble family, you would be able to lead a comfortable life with the money you inherited. But commoners like Bbaengdeok’s mother found it hard to make a living for herself, so a sense of shame or honor must have been a luxury she couldn’t afford to have in order for her to survive in the tough world. Being widowed at a young age and having to raise young children on her own must have turned her into such a heartless woman. There days the story of Bbaeongdeok’s mother has been rendered into new songs or movies. Here’s a modern song titled “Bbaengdeok’s House” performed by Lee Hee Jeong Band.

A few years ago, a movie entitled “Madam Bbaengdeok” was released. It was a modern adaptation of Simcheongjeon심청전, in which the character of Bbaengdeok’s mother seeks revenge after being dumped by college professor Sim Hak-gyu심학규. There is even a fairytale entitled “Bbaengdeok’s Tears,” which stars Bbaengdeok. His real name is Byeongdeok병덕, who pretended to be a dimwit after his father was accused of treason so that he and his mother can be spared. One day he has a huge crush on Simcheong and goes to China to save her life. His love for Simcheong was what drove his mother to seek revenge on Simcheong’s father. In the real pansori version of Simcheongga, Bbaengdeok’s mother was just a comical character, but this fairytale turned her into a woman of independent will who takes control of her life. Let’s wrap up this week’s Sounds of Korea with “Bbaengdeok” sung by Kim Yul-hee and accompanied by NST and The Soul Sauce.

Music 3: Bbaengdeok/ Sung by Kim Yul-hee with NST and The Soul Sauce