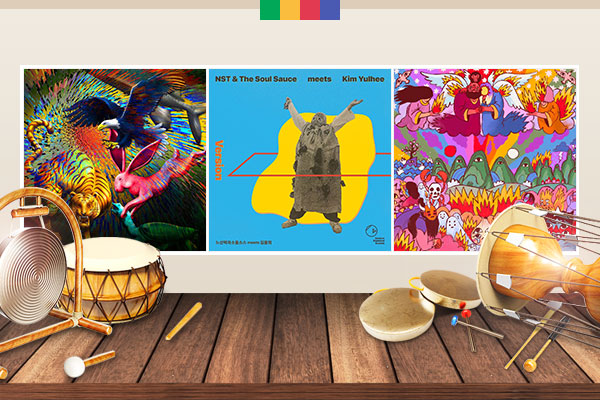 Have you seen Korean tourism promotional videos titled “Feel the Rhythm of Korea?” Released on YouTube by the Korea Tourism Organization, these videos feature iconic tourist spots around Korea with only music and dance. The unusual choreography of Ambiguous Dance Company dancers and the funky music of Leenalchi이날치 Band make the videos quite intriguing and addictive. There was a band named SsingSsing a few years back that fascinated the world with its original sound and appearance. The band, led by Gyeonggi folk song singer Lee Hee-moon, was disbanded in 2018, but its former member Jang Young-gyu장영규 later organized Leenalchi Band with other pansori singers. Pansori music that is hip enough to be played in clubs was accompanied by the offbeat choreography of Ambiguous Dance Company to entice the younger generation. Let’s listen to “Tiger Is Coming,” used for the Seoul episode of “Feel the Rhythm of Korea” performed by Leenalchi Band.

Many people would think the name Leenalchi is distinct, but Lee Nal-chi was actually the name of a famed pansori singer in the 1800s. His real name was Lee Gyeong-suk이경숙, but he was better known by his nickname of “nalchi,” meaning a flying fish, given because he walked high ropes as nimbly as a flying fish. In the old days, some tightrope walkers were known to sing pansori pieces while walking on top of a rope. Lee Gyeong-suk learned to sing as part of his tightrope act, but eventually became a professional pansori singer. His specialty was “Bird Song” and birds are said to have flocked to him when he sang it. The name Leenalchi Band came from the desire to sing in a dynamic and vivid way as the esteemed singer. Even now, many Koreans mistakenly believe that traditional music is too difficult or too boring. But these days young musicians are working hard to change that preconception and show how exciting traditional Korean music can be. Coming up next is “Buddhist Monk Song” by Kim Yul-hee and a reggae group called NST and The Soul Sauce. This song is taken from pansori “Heungboga,” where a Buddhist monk appears in front of Heungbo and his wife and tells them which house site would bring wealth and good fortune.

Now that you’ve listened to “Tiger Is Coming” and “Buddhist Monk Song,” you might have noticed that their beat was different from other conventional Korean songs. When an important character makes its appearance in a pansori piece, it is signaled by a distinctive rhythm called eotmori엇모리, very fast ten-eight times beat. Now the last piece for this week’s Sounds of Korea is Akdan Gwangchil악단광칠, also known as ADG7, performing a fiery yet delightful song called “Noza Noza.노자노자” The songs you heard earlier in the show were accompanied by western instruments, but ADG7 uses only Korean traditional instruments to create compelling sounds. “Noza Noza” is from ADG7’s second album released this year. This song with a psychedelic vibe may not sound completely like a traditional Korean folksong, but its lyrics, which go “Lazy, lazy, lazy, lazy, what is important is the age of the heart, the age of the soul that knows how to dance,” communicates the uniquely Korean sentiments found in many Korean folk songs. This week’s Sounds of Korea concludes with ADG7 singing “Noza Noza.”