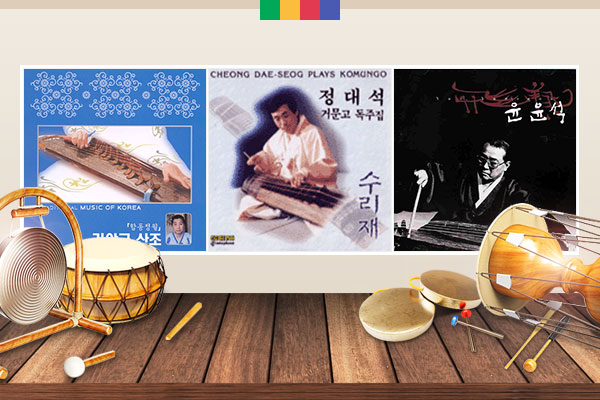 String instruments from the west are largely played by drawing a bow across the strings, like the violin, viola or cello. Such instruments are called rubbed string instruments. In Korea, haegeum and ajaeng belong to the rubbed instrument category, while gayageum, geomungo and bipa are plucked instruments played by plucking the strings with the fingers or a tool. Today we will listen to music played with plucked string instruments. The most iconic plucked instrument in Korea is gayageum, which supposedly was invented by King Gasil of the ancient Gaya Kingdom. Gaya was a coalition of several tribe nations at the time. King Gasil ordered the invention of an instrument that can bring different languages and music styles together and the end product was the gayageum. Ureuk, known as the father of gayageum, was the one who wrote and played gayageum pieces based on the music of different regions. When Gaya was about to fall, Ureuk sought asylum in the neighboring Silla Kingdom with the gayageum. His action would have been seen as a great betrayal to defect to an enemy kingdom with the musical instrument invented by a Gaya king, but the iconic instrument of Gaya was able to survive to this day because of this decision by Ureuk. Perhaps he should be regarded as the genuine patriot of Gaya. The first piece for today is the Jajinmoro자진모리 part from Choi Ok-sam-style Gayageum Sanjo with Hamdong Jeongwol playing the gayageum and Kim Myung-hwan the drum.

Gayageum had retained its original shape for more than a thousand years, but it was modified into a sanjo gayageum with a reduced size and smaller gaps between the strings at the end of the Joseon period, allowing the new gayageum to perform faster and more varying melodies and giving rise to freestyle gayageum music. Sanjo music is characterized by the progression of rhythm that starts very slowly but accelerates gradually to reach the fastest beat at the end. Following the first introduction of gayageum sanjo music in the late 19th century, Korean music became more diverse as freestyle sanjo pieces were written for other traditional instruments as well. Geomungo is also played by plucking the strings with a tool called “suldae술대,” a short and thin bamboo stick that is held between the index and middle fingers. Geomungo has six strings, but most of the melodies are played on two strings called “yuhyeon유현” and “daehyeon대현.” The yuhyeon string is as thin as the ones in gayageum, creating a light, merry sound, while the daehyeon string, about two or three times thicker than the yuhyeon one, makes a deep, resounding sound. One way to enjoy geomungo music is to appreciate this difference in sound. Scholars in the old days used to train their minds and maintain peace of mind with slow and simple geomungo tunes. But geomungo music became faster and more lyrical with time. Coming up next is a creative piece titled “Surijae수리재,” the name of a thatched-roof house near a small stream in Gangwon-do Province. Let’s listen to the first two movements of this piece with Jeong Dae-seok playing the geomungo.

Last music for today is a steel ajaeng아쟁 piece. Ajaeng is the largest traditional string instrument and thus makes the deepest sound. It is played mostly by plucking the strings with the fingers, but sometimes by rubbing a bow across the strings. With the popularity of sanjo music, ajaeng was also downsized to play sanjo pieces and modified with steel strings instead of silk strings. The last piece for today’s Sounds of Korea is “Steel Ajaeng Sinawi” with Yun Yun-seok playing the steel ajaeng, his son Yun Seo-gyeong the sanjo ajaeng and geomungo by Kim Mu-gil.