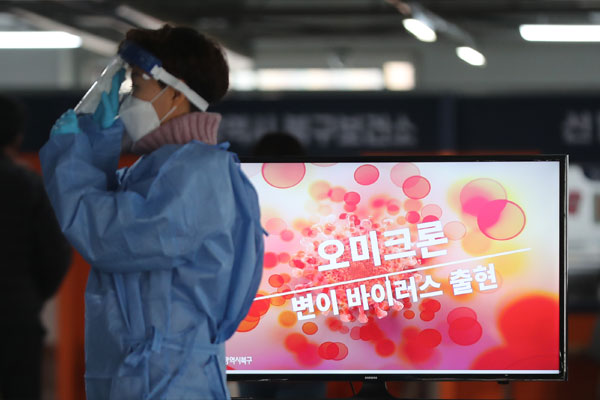 The new COVID-19 variant, omicron, is spreading across the globe escalating tension across the entire world. According to major foreign media agencies, omicron cases have been found on all six continents in only a week since the new variant was first reported on November 24.

While it is not yet clear whether omicron is more transmissible and whether it leads to more severe disease, compared to other variants, volatility and uncertainties have grown in the global economy. It is certainly bad news for the South Korean economy, which has weathered the COVID-19 pandemic crisis on the back of its strong exports. Here is economic commentator Chung Chul-jin to examine the potential impact of the variant on the Korean economy.

We’re afraid of the new variant because of the possibility of additional lockdown measures. Countries are concerned that people might be discouraged from going out again, while factories may shut down again. It is little wonder that stock markets around the world plunged temporarily.

But the true threat of omicron has yet to be confirmed. We have to watch market volatility until more is known about its true nature. The global economy will be relieved or frustrated, depending on the fatality rate of the fast-spreading variant.

On November 27, the World Health Organization designated a new coronavirus variant as “a variant of concern” and named it omicron. Although it is still uncertain how destructive the new variant is, experts widely believe that it spreads more easily than delta and it might be able to evade some of the protection provided by vaccines.

As countries around the world have raised their vaccination rates, the global economy was expected to get out of the pandemic tunnel. But the emergence of the omicron variant has dampened the rosy prospects. Some forecast that global economic growth next year could fall by more than 0.4 percentage points from the previous projection of 4.6 percent, if omicron transmits faster than delta.

In the best-case scenario, omicron is slightly more transmissible but causes less severe infections, while inflation is not an issue. If this is the case, Goldman Sachs assumes that omicron could boost global growth. In contrast, other ratings agencies such as Moody’s and Fitch predict that the omicron variant will pose risks to inflation, regardless of its disease severity. If the variant causes more severe cases, it will destroy the supply chains and supply shortage will elevate inflation. If the variant turns out to be less harmful, on the other hand, many countries will reach herd immunity and people will step out into the streets, leading to growing demand and rising inflation. We can assess the prospects of the economy by examining the three factors—omicron’s transmissibility, severity of disease and inflation.

Meanwhile, U.S. Federal Reserve Chairman Jerome Powell has indicated that the Fed may speed up tapering of its bond purchases. Despite concerns about omicron, the U.S. is tightening its monetary easing policy, apparently in the belief that it is more urgent to rein in inflation. Amid growing concerns that the U.S. might default on its debt, the global economy is becoming increasingly volatile.

Turning our eyes to South Korea now, the country’s overall industrial output in October marked the biggest fall in 18 months.

It would be ideal that private consumption will revitalize. Unfortunately, private spending remains sluggish, even after the government distributed discount coupons. One of the major tasks is to how to make consumption contribute to supporting the South Korean economy, which has so far been propped up by exports and manufacturing.

South Korea’s exports have performed quite well this year. The nation’s economy grew 0.3 percent in the third quarter, on the back of brisk outbound shipments. Exports in November increased 32.1 percent year-on-year to reach 60.4 billion US dollars. It marks the first time that the country’s monthly export volume has exceeded 60 billion dollars. In 2021, exports are expected to post a record high on a yearly basis as well.

Despite the brilliant performance, though, the country can’t be so optimistic due to the unstable external environment. If the spread of omicron forces countries to close their doors, it will affect South Korea’s exports negatively and deal a further blow to the ongoing global supply chain bottleneck.

The South Korean economy relies heavily on exports. To increase exports, foreign countries should consume more. Unfortunately, Europe has closed its door, while New York has declared a state of emergency. If countries adopt lockdown measures yet again to prevent the spread of omicron, upward inflationary pressure will be eased. But most ideally, omicron turns out to cause less severe disease and the economy is kept afloat so that South Korean exports will continue to remain strong.

The Bank of Korea believes that the nation’s economy will still be able to achieve its 2021 growth target of 4 percent. To this end, it should grow more than 1.03 percent in the fourth quarter. But it is uncertain how bad the newly identified variant omicron will be. Inflation is another issue. As consumer prices in November rose 3.7 percent, the Bank of Korea says that this year’s annual consumer price growth may exceed its forecast of 2.3 percent.

Amid unfavorable economic indicators both inside and outside South Korea, the severity of omicron is likely to determine the future course of the nation’s economy.

It is urgent for medical experts to figure out the true nature of omicron first before the government maps out any countermeasure. No matter how serious the variant is, I don’t think the government’s previous quarantine measures will work. The government placed restrictions on economic activities and released a huge amount of liquidity in order to keep the economy going. If it adopts the same policy again, people will scramble to buy stocks or real estate. The asset price bubble will then be out of control. I think it’s necessary to find a solution without lockdown measures, while fighting against the omicron variant.

In the course of overcoming the COVID-19 pandemic, the global community is faced with an unexpected negative factor, namely, omicron. Many are warning against excessive fears about the new variant. Still, Korea should come up with bold and preemptive response measures to minimize the potential economic shock.