Share
Print
Now it’s time to take a close look at a small, but competitive business making a difference for the Korean economy. This week’s spotlight is on Arztin, a maker of special purpose skincare products.

Cosmetics are a thriving industry enjoying an annual growth average of 5% worldwide. The market for so-called “functional cosmetics” has expanded greatly as more and more consumers look for effective anti-wrinkle and whitening products to keep their skin bright and younger-looking. In Korea alone the market for functional cosmetics used to amount to almost 174 million U.S. dollars in 2001, but has now grown more than ten times since then to over 2.5 billion dollars. Today we’ll take a closer look at a company undergoing a particularly rapid expansion even among the fast-growing functional cosmetics market. Let’s find out more about Arztin에르쯔틴 from its executive Kim Yu-jin.

Although the company was established in 2013, we started selling to general consumers in 2014. Before launching our products, we spent about 10 years developing business plans and our line of unique skincare products. The company name “Arztin” means female doctor in German. The brand name was inspired largely by the fact that our CEO used to be a female doctor. Also, Germany invokes an image of trustworthiness and first-rate technology. So the name Arztin hopes to inspire the image of individual consulting by a caring female dermatologist and the German tradition of exceptional technology. 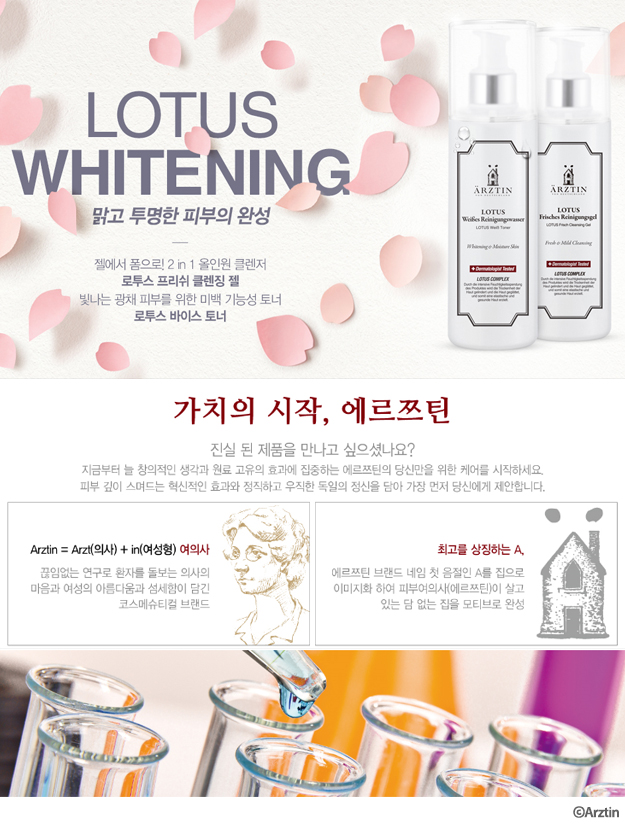 Arztin, the German word meaning a female doctor, was established by former dermatologist Yu Kyung-ah유경아. While working as a dermatologist, Dr. Yu saw the need for products that effectively and quickly regenerated the skin after treatment. She gathered data for more than ten years and studied the ingredients of the cosmetic products imported from Germany. After all that work she was at last able to develop her own line of medically effective skincare products. Often called “derma cosmetics” to indicate that the products were created by a professional with expertise in dermatology, these functional skincare items were the cornerstone of Dr. Yu Kyung-ah’s company. She founded Arztin in 2013 and rolled out the first batch of her products a year later.

Our maiden product was Schild실트 cream, which came from the German word for “shield.” The cream contains an optimal mixture of prescribed ingredients, including world-famous Nordenau mineral water. Our anti-wrinkling cream stands out because we even care about the water we use and it can be prescribed for different age groups. Our prescriptions tell how each individual can use the product more effectively to fit a specific age group and how one product can be used in combination with other skincare items to achieve maximum benefit. So I think our product is an entirely different anti-wrinkle cream from those of our competitors.

Schild실트 Cream works like a protective shield for the face. It is a regenerative cream with soothing, moisturizing and anti-aging functions. The cream’s appearance resembles a skin regenerating ointment, but it has a superior moisturizing effect, which comes from Germany’s Nordenau mineral water, one of the world’s four miracle healing waters. In fact, this cream helps soothe the skin by supplying moisture immediately after its application and covering the face under the cream’s protective shield. Moreover, customers can talk to the professional consultants of Arztin and get product recommendations suitable for their age and skin condition. Arztin’s tailored customer care has distinguished the company in the functional cosmetics market.

Our products were introduced to the general public for the first time in March 2014. It’s been about two years since the products first made it to the market. I think the company is growing rather quickly. Since the company was founded by a doctor, our products are medically effective. So it’s only natural that we supply our products to hospitals and spas. We also run our own online shopping mall and supply to five of the largest internet shopping malls in Korea, including Hyundai, Lotte, and Shinsegae. Although we don’t have any sales representatives or run many advertisements, we were able to enjoy rapid expansion because 95% of our customers make repeat purchases. The company’s growth has been powered by word-of-mouth and our excellent product quality.

In the first year of product marketing, Arztin recorded nearly 1.5 million dollars in sales, and last year’s revenue amounted to almost 2.8 million dollars, nearly double the figure from the previous year. The driving force behind Arztin’s rapid growth, even without sales representatives or public advertisements, is its product quality. Carefully selected ingredients and technical precision resulted in high product reliability and customer loyalty. Such customer reaction was observed in overseas markets as well.

Our products can be purchased in Korea and five other countries. Customers in Japan, China, Singapore, the United States, and Great Britain buy our products mostly through online malls. We started selling in the American and British markets in 2015 and saw great growth in the Japanese online market in 2015. A large number of Japanese buyers made inquiries to our company headquarters in Korea and we started selling our products in Japanese retailers as well. We plan to expand our business in the Chinese market and provide an extended lineup of our creams to our Japanese customers.

Products with medical benefits have become the latest trend in the cosmetics industry. The basic requirement for good cosmetics products is the improvement in skin condition. Clear, blemish-free skin makes the application of make-up seamless. Arztin realized this fact early on and has pulled all of its resources to make the skin healthy and younger-looking. K-beauty is likely to shine on, thanks to a company like Arztin, which knows how to make quality products.
Share
Print
List