Share
Print
The most talked-about TV show these days is “Misaeng,” which is aired on a cable network. Translated into “Incomplete Life,” the show is about a young man, who works as a two-year contract employee in a large trading company after failing to become a professional baduk or go player. The show’s realistic portrayal of harsh corporate life and relatable characters have made it the hottest drama on TV.

(Woman 1) Any office worker could relate to “Misaeng.” Each character has a story to tell and that is similar to our own reality. I like watching it because it talks about some realistic issues.
(Man 1) There was a scene where the main character was chewed out by the members of another department. I was able to relate when his boss came to his defense and finally acknowledged him as a part of the team.
(Woman 2) I first got interested in the show because of the main character. But the drama showed what the real working world is like. The reality is harsh, but there are some parts that are heart-warming and comforting.

A webtoon is a cartoon series published online on an Internet portal site. The original webtoon “Misaeng” was authored by Yoon Tae-ho, and was already quite popular among office workers when the series began back in 2012. Here’s Mr. Yoon to tell us more about his most well-known creation. 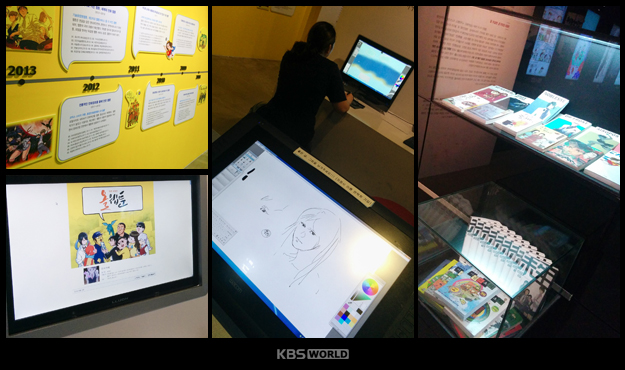 People tend to think that graduating from a good university and getting a good job at a large company will complete their lives. But that’s not the end. Sometimes they find themselves far away from their true goals in life. I wanted to show that life begins incompletely and ends incompletely. The efforts to complete it, working hard toward life’s goals and reaching for your dreams, is what makes living worthwhile.

Misaeng is a baduk term that describes a house or a horse that is not really alive, but not quite dead either. In contrast, wansaeng or complete life is a situation that can be salvaged no matter what. When posting the webtoon series, Yoon Tae-ho began each episode with a baduk strategy that imparted an important life lesson to the readers. Our lives are like the misaengs on the baduk board and we are all racing toward wansaeng to complete our lives. The webtoon has seen success after success, as it was viewed more than a billion times, built a legion of loyal fans, and made into a TV show.

So far most Korean TV series have dealt with romantic relationships among characters, unlikely success stories, family secrets, and cheating husbands and wives. Tired of these worn-out, clichéd stories, Korean TV viewers clamored for something new, stories they could relate to and be moved by, and found what they were looking for in webtoons. Here’s Professor Hahn Chang-wan of Sejong Univerisity’s Department of Cartoon Animation.

Although the quality of webtoons and screenplays has improved, the ranks of screenwriters, drama writers, and cartoonists have thinned. It’s not easy for the few writers to come up with new, untold stories, and most films and TV shows are confined to the genres of romantic comedy, fantasy, and action adventure. In particular, a large number of TV dramas deal with deep, dark family secrets, deception, and jealousy. So the public welcome the unique plots and topics of webtoons and find them refreshing. A growing number of webtoons are now being created with plans to be turned into TV shows from the start.

In fact, there were several movies that were based on webtoons.

Released in 2010, the film “Moss” is based on another one of Yoon Tae-ho’s webtoons.

Webcomic artist Kang Full’s “26 Years” was made into a movie of the same title in 2012.

And “Secretly Greatly” released last year drew almost seven million people to become the highest grossing film based on an online cartoon. The trend continued into this year as well, with “Fashion King” by Kian84 opening in theaters last month.

As movies based on Internet comics enjoy box office success, dramas adapted from webtoons are captivating TV viewers with their fresh approaches and tight plots.

“Mary Stayed Out All Night,” a romantic comedy aired on KBS in 2010, was originally a web-based cartoon drawn by Won Soo-yeon.

The main female character named Wi Mary has absolutely no dating experience, but she suddenly finds herself stuck in a love triangle and having to choose between a charming vocalist and a gentleman who has everything.

Popular webcomic “Pretty Man” was aired on KBS last winter. Adapted from an online comic of the same name, the plot centers around how a beautiful man named Dokgo Ma-te, who woos only successful women to get rich and ahead in life, changes into a man in the truest sense.

In addition to “Misaeng,” another webcomic-based series is growing in popularity on cable TV. “Dr. Frost” by Lee Jong-bum is about a brilliant psychologist who helps solve crime and it is also seeing its ratings climb steadily. So webtoons have inspired a number of interesting and successful TV series and films. What are the secrets to their success? First, it has to do with a big pool of talented webcomic artists. Here’s Lee Jong-bum, author of “Dr. Frost.”

Webcomic artists come from various backgrounds. They used to be art majors, but now there are many cartoonists who used to be teachers and government workers and what not, which is why there can be so many different topics and genres. There is no limit to their ideas, which is why they are sold easily and can be turned into other genres.

Lee Jong-bum himself was a psychology major in college. He uses the knowledge he learned at school to spin gripping stories about how a good-looking, gifted psychologist applies his professional expertise to solve crime. Lee thought it was only right to draw about something he knew well.

The webtoon is based on my major, psychology. Back when I started this comic series, there weren’t that many webcomics about professionals. Now there are plenty of webtoons about lawyers and other specialists, but at the time there were very few comic artists capable of conducting thorough research on special topics. When people ask me what psychology is, I say that it’s a field of study that helps me understand myself. Then I thought it would be interesting to make a story about a psychologist who doesn’t understand himself that well. So that kind of person became the protagonist of my series.

Since the webtoon features a professional psychologist, detailed advance research and field study were essential to create a realistic and convincing work. Although Lee Jong-bum of “Dr. Frost” majored in psychology, he had to look through countless theses and even recruited a group of psychologists to give him professional advice.

I talked to my college professors and other psychologists. I had four or five advisors whom I regularly interviewed and sought information from while I continued with the series. I also watched a lot of news and read about social phenomena. Psychology helps me find out about the emotional and psychological problems that plague today’s readers. When the time for college admissions test comes around, I study about the despair felt by the students who take the test. I learn about depression and insomnia when I’m drawing about young, jobless people. When a topic that interests me comes up, I weave a story around it and go talk to the experts to make sure that the story sounds plausible.

A friend I met on a social networking site had a boyfriend who works for a big trading company. So I even went to talk to them when they were out on a date. Another of my SNS contacts is in corporate public relations, so I met with him several times to study his field. I had about seven or eight such advisors.

Yoon Tae-ho gave such detailed and accurate descriptions of what goes on inside a trading company, from lowly interns to top management, so that anyone who had worked in an organization could relate to the episodes and put themselves in the characters’ shoes. Such attention to detail has been well translated into a TV series, delighting the fans of the original webtoon and earning a whole new group of admiring fans. Lee Jong-bum of “Dr. Frost” also has high hopes for his creation made over into a TV show.

Once I sell the rights to my series, I look forward to the end product not as the original artist, but as a viewer. It is wonderful and I feel a little apprehensive as the original cartoonist to see my work transformed into another powerful content, because even if the original idea came from me, I can’t control how another writer uses that idea. In recreating someone else’s work, it is only natural to be curious and expectant of how another person’s emotions and perspectives are incorporated into the original work. I hope that the core essence of my story will be maintained, but I generally enjoy the transformation process.

In order for a webtoon-turned-drama to be successful, it has to have a cast of actors that are perfectly synchronized to the characters in the original cartoon. In “Misaeng” all the actors and actresses look like they popped right out of the comic pages, resembling their characters’ hairstyles, wardrobes, behaviors, and even personalities. Viewers have fun comparing their favorite characters to the actors who play them.

(Man 1) I think it’s great to turn webtoons into films. People react positively when actors portray the personalities and behaviors of webtoon characters properly. That way, people can relate to the characters more.
(Woman 1) I like films or TV dramas adapted from cartoons. The characters’ images are perfectly carried over from the cartoons, which makes the films or shows really fun to watch. I watch those kinds of shows religiously.


Viewers connect with the characters and situations, and end up laughing, crying, and being comforted just like the characters in the shows. Here’s Professor Hahn Chang-wan of Sejong University’s Department of Cartoon Animation to explain more.

The unique content of “Misaeng” makes its target group of middle-aged workers think that the drama is all about them. That’s why the TV show is generating a number of social topics that need to be discussed. A whole lot of people relate to “Misaeng,” which has become a social syndrome or a social phenomenon.

Webtoons have evolved from simple entertainment on the Internet to TV series and films and even to social phenomena. Their refreshing topics and plots have drawn not only tech-savvy generations, but older analog generations. The trend of turning webcomics into other media contents is likely to continue for some time.
Share
Print
List