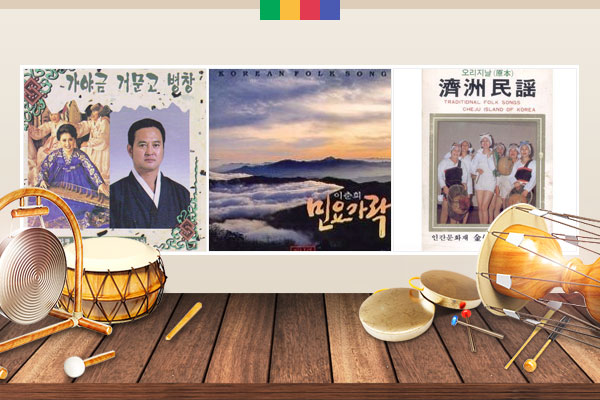 Those familiar with the Honam(호남) area may question why people would sail from Hampyeong(함평) to Gwangju(광주). But in the old days when there were no automobiles, transporting goods on boats via the sea or river was the fastest way to ship things in bulk. There used to be a bustling water route on the Yeongsangang(영산강) River from Gwangju(광주) to Mokpo(목포) with stops at Naju(나주), Hampyeong(함평), Muan(무안) and Yeongam(영암). This water route was discontinued in the 1970s, which is why people today are unfamiliar with the idea of traveling to Gwangju(광주) on a boat. “Honamga(호남가)” also features a man traveling on a fishing boat from Jeju(제주) Island. In the old days, Jeju(제주) Island was a part of Jeolla(전라) Province, which is why it was included in “Honamga(호남가).” As you can see, old songs provided listeners with information about a certain region’s history, culture, society, and economy. Coming up next is a Gyeonggi-do(경기도) folk song titled “Song of Geumgang(금강) Mountain,” which describes the scenic spots at the popular tourist destination. Folk song diva Lee Chun-hee(이춘희) sings this descriptive song.

During the reign of King Jeongjo(정조), there lived on Jeju(제주) Island a wealthy female merchant named Kim Man-deok(김만덕). She used to be a gisaeng(기생) but dived into the distribution business after gaining commoner status. She amassed great fortune from her business, but when the island was hit with a severe famine, she willingly donated her wealth to feed the starving residents and help in relief projects. King Jeongjo(정조) thought highly of her charity work and asked her what she wanted as a reward. Kim Man-deok(김만덕) said she wanted to visit Geumgang(금강) Mountain, because back then it wasn’t easy for anyone, let alone a woman, living in Jeju(제주) to travel outside the island. The king also ordered the famous painter Kim Hong-do(김홍도) to tag along and paint the mountain sceneries for him to enjoy later. Kim Hong-do’s(김홍도) paintings of Geumgang(금강) Mountain can still be seen in museums to this day. As you can see, Geumgang(금강) Mountain used to be everyone’s dream travel destination, but not many were able to actually go there. So songs and paintings that depicted the mountain’s beautiful spots served as travel shows or travelogues. Next up is “Ten Landscapes in Yeongju(영주),” a song about ten iconic scenes of Yeongju(영주), another name for Jeju(제주) Island.

This song features scenes unique to Jeju(제주), such as the sunrise at Seongsan Ilchulbong(성산일출봉), a tangerine forest under the autumn moon, winter snow at Baengnokdam(백록담) crater lake on Hallasan(한라산) Mountain, and Jeju(제주) horses running across the plain. Kim Ju-ok(김주옥), a master singer from Jeju(제주), and a chorus sings the song.