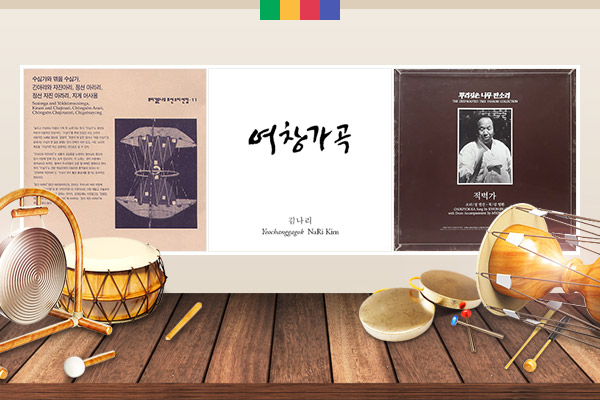 “Arari아라리” from the Jeongseon정선 area in Gangwon-do Province is considered the oldest version of Arirang. It is also known for its long lyrics. One well-known passage goes, “Would it snow? Would it rain? Would the monsoon come? Dark clouds are gathering over Mansusan만수산 Mountain.” A young woman and a young man who lived across the river from each other fell in love. On the day of their rendez-vous, a heavy downpour caused the river to flood and barred the two lovers from being united. This was the song that the couple supposedly sang while lamenting the untimely storm. If it had been the 21st century, they would have used a video call or an instant messenger under such circumstances. But in the old days, there was no way to contact each other in an emergency like flooding. Here’s Kim Byung-ki and Park Gyeong-won singing “Jeongseon Arari.”

Rain frequently kept loved ones from seeing each other in the old days. “Wind Is,” a song for female singers, is about such an occasion.

Winds roar like an earthquake and the rain is pouring hard.

My love, whom I have flirted with for a while, vowed to meet me tonight,

But how can he come in the middle of this rainstorm?

If he really came to see me, he must be my destiny.

It would have been extremely difficult to travel to see one’s love in the middle of a rainstorm. But if he did come and the two lovers were united, that would prove that the couple was meant to be. This is a hopeful song that touches the hearts of listeners with its tender, loving lyrics. Here’s Kim Na-ri singing “Wind Is.”

Wind Is/ Sung by Kim Na-ri

In the old days, weather affected a wide range of events, even war. Arrows were one of the most used weapons of the old, but an arrow’s range was greatly determined by the wind and its direction. In the Chinese classic, “The Romance of the Three Kingdoms,” strategist Zhuge Liang decided to launch a fire arrow assault on General Cao Cao’s army. The battle took place in the middle of winter, around the time of winter solstice. Usually, northwestern wind blows in the northern hemisphere in wintertime, which means the wind was blowing from north to south. Cao Cao’s troops were on the northern side of the river, while Sun Quan’s strategists, Zhuge Liang and Zhou Yu, and their soldiers were on the southern side. This means that shooting fire arrows from south would not be effective in defeating Cao Cao’s army, but could likely hurt Zhuge Liang’s men instead. Zhuge Liang offered to pray to the gods to change the wind direction to southeast. Zhou Yu, who didn’t like Zhuge Liang, approved of the plan, thinking that if the wind direction changed, they would be able to capture Cao Cao, but if not, he could have Zhuge Liang arrested for deceiving them. Unaware of his fellow strategist’s treacherous intent, Zhuge Liang built an altar and prayed to the gods. Amazingly, by the time he finished his prayer, the wind changed its direction and started to blow to the north. Stunned by the surprising turn of events, Zhou Yu decided to kill Zhuge Liang before he becomes even a greater political figure, but Zhuge Liang makes his escape before his rival can do him any harm. For today’s last piece, pansori master Jeong Kwon-jin정권진 sings that very passage from pansori “Jeokbyeokga적벽가,” where Zhuge Liang prays for the southeastern wind.

Praying for southeastern wind from Jeokbyeokga/ Sung by Jeong Kwon-jin