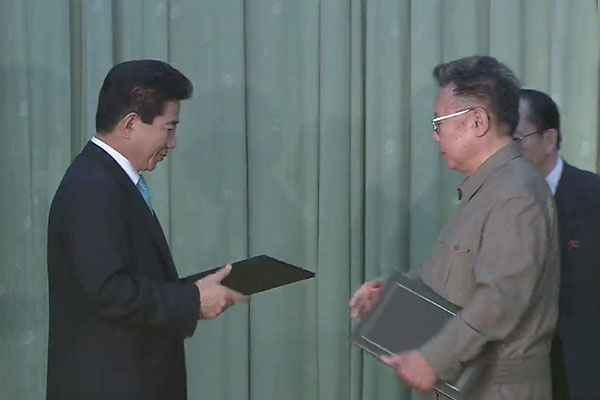 On October 5 in Pyongyang, South and North Korea jointly celebrated the eleventh anniversary of the adoption of the October 4 Declaration signed by former South Korean and North Korean leaders Roh Moo-hyun and Kim Jong-il at the 2007 inter-Korean summit. It was the first joint inter-Korean event on both the government and private level in eleven years.

As the October 4 Declaration presents a vision of inter-Korean peace and prosperity, it is significant that the joint commemoration was held this year, as Seoul and Pyongyang held three summit meetings marking a new milestone in peace efforts. Today, we’ll learn more about the landmark 2007 South-North joint declaration.

On the morning of October 3, 2007, the summit between then-South Korean President Roh Moo-hyun and his North Korean counterpart Kim Jong-il began in a calm atmosphere.

The summit talks went longer than expected, as the two sides gave their own explanations of various proposals and discussed many details. Regarding the establishment of a special peace and cooperation zone in the West Sea and cooperative complexes for shipbuilding in North Korea, Kim Jong-il said that it would be necessary to discuss those issues with the military. He added that military officials were standing by in the next room. In the meantime, North Korean Vice Foreign Minister Kim Kye-gwan(김계관) attended the summit meeting to brief the two leaders of the results of the October 3 agreement reached at the six-party nuclear talks.

This is Lee Kwan-se, who witnessed the 2007 summit as the then-South Korean Vice Unification Minister. At the summit, the two leaders discussed a wide range of issues, including denuclearization of the Korean Peninsula.

Meanwhile in Beijing, six-party talks aimed at resolving the North Korean nuclear issue were held the same day. At the multilateral negotiations, North Korea agreed to disable all its nuclear programs and fully declare its atomic activities by the end of 2007, while the U.S. promised to take Pyongyang off the list of states that sponsor terrorism. Propelled by these positive developments, the inter-Korean summit in Pyongyang was able to dive deep into bilateral issues.

The following day on October 4, the two Korean leaders signed the joint declaration. That was the moment when the congenial atmosphere of the summit reached its peak.

The eight-point agreement, known as the “Declaration of the Advancement of South-North Korean Relations, Peace and Prosperity,” is six times the length than the five-point declaration adopted at the first inter-Korean summit on June 15, 2000.

Seoul and Pyongyang signed a detailed agreement, namely, the October 4 Declaration. The 2007 summit was more flexible than the previous one in 2000, and both sides made considerable efforts to produce tangible results at the second summit. Above all, they saw eye to eye on the need for substantial military trust and lasting peace on the Korean Peninsula.

While the 2000 summit was focused on economic exchanges and dialogue, the 2007 event presented a more comprehensive and higher vision for cross-border relations.

The two leaders focused more on practical measures to defuse tension and promote exchanges, and finally reached an agreement that contained details on a broad range of issues.

Previously, South-North relations were mostly about exchanges and cooperation. But the 2007 summit provided a specific framework for building military trust and institutionalizing peace. The two sides discussed issues of military and peace, which had been put on the back burner before. This was a proactive approach to formally ending the Korean War and settling peace on the peninsula. The declaration calls for South and North Korean cooperation in pursuing multinational talks to make those goals a reality.

The declaration also seeks to achieve joint prosperity through various economic cooperation programs and to expand South-North relations in all areas, including politics, the economy and the military, in a more balanced way.

The October 4 Declaration contained extensive language on cross-border interaction, including politics, peace efforts, economic cooperation, society, culture, and humanitarian affairs. Both the South and North promised to fulfill the June 15 Declaration, respect each other, and build mutual confidence. They agreed to end their military hostility and seek an end to the Korean War. The two sides also agreed to expand reunions of separated family members.

It is also notable that the two sides agreed to expand cross-border economic cooperation, which had been limited to the Gaeseong Industrial Park business and Mt. Geumgang tour program, into other North Korean regions such as Haeju, Nampo and even Mt. Baekdu.

In the declaration, the two Koreas promised to accelerate the Gaeseong Industrial Park business and allow direct passage to North Korea’s Haeju port as well as the passage of freight trains between Musan in South Korea and Bongdong in the North. In addition, they agreed on the opening of a direct air route between Seoul and Mt. Baekdu in the North for mountain tours by South Koreans.

Unfortunately, however, the nearly four dozen inter-Korean projects and activities agreed upon at the October 4 Declaration failed to materialize.

There just wasn’t enough time, as Roh Moo-hyun’s government would end in February the following year. The next South Korean government was different from the Roh administration in terms of their North Korea policy and perspectives of inter-Korean relations. The following government did not apply Roh’s policies consistently, and the 2007 summit the October 4 Declaration became a mere scrap of paper even before the two Koreas tried to implement it.

As Mr. Lee pointed out, there was not enough time to implement the declaration, with President Roh’s term of office expiring in just four months. The next president, Lee Myung-bak, crafted his own North Korea policy. Under his vision, South Korea would actively pursue economic cooperation with North Korea only if the North abandons its nuclear weapons development and reforms its society. Pyongyang was extremely unreceptive to this new approach.

Inter-Korean relations quickly deteriorated due to a series of deadly North Korean provocations, including a torpedo attack against the South Korean warship Cheonan in 2010 and the shelling of Yeonpyeong Island in Southern waters. The two Koreas would not hold a summit until this year, 11 years after the October 4th agreement.

The most important part of the October 4 Declaration was the establishment of peace, and the 2007 summit was focused on laying the groundwork for bringing inter-Korean ties to another level. At the time, the two leaders shared the view that it would be difficult to achieve common prosperity only through economic exchanges without settling peace on their divided peninsula.

Mr. Lee says that the agreement signed at the April inter-Korean summit this year reflects the two Koreas’ commitment to peace, prosperity and unification upheld by the October 4 Declaration.

The 2007 agreement provided an outline for the Panmunjom Declaration, calling for the denuclearization of the Korean Peninsula, ending the Korean War, and promoting cross-border economic cooperation. Indeed, the inter-Korean summit accord eleven years ago serves as an important steppingstone to regional peace.

(Next week, we’ll talk about South Korean tours to the North Korean border city of Gaeseong that started in 2007.)