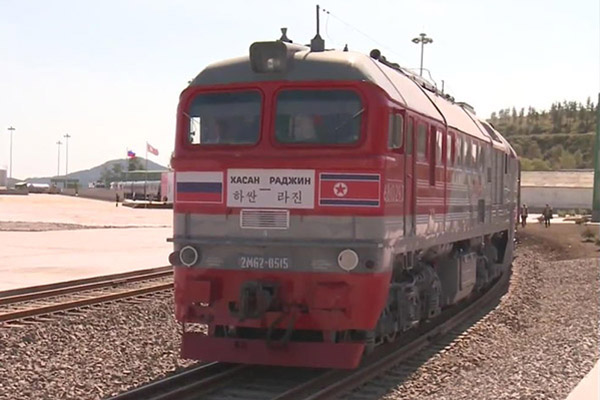 South and North Korea began a joint survey of North Korean rail tracks on November 30 in a move to modernize North Korean railways and eventually reconnect cross-border railroads. The first joint inspection in eleven years involves the test operation of trains on 2,600 kilometers of North Korean track. The connection of the inter-Korean railways, if realized, will pave the way for establishing a regional logistics hub, as trains departing from South Korea will be able to travel to China and Russia via North Korea.

But in fact, this is not the first time the two Koreas made efforts to connect their logistics network and infrastructure. Today, we’ll take a look back at the so-called Rajin-Khsan project, a trilateral logistics scheme involving the two Koreas and Russia. Let’s hear from Kim Young-yun, president of the Korea Logistics Forum.

The project was about establishing a rail network linking North Korea’s northeastern city of Rajin with the eastern Russian border town of Khasan. The new rail network would serve as a land bridge to allow delivery of Russia’s rich mineral resources, including coal, to South Korea or other countries via Rajin port. The ambitious logistics project would connect the Korean Peninsula with Asia and Europe.

The Rajin-Khasan project is a rail and port development initiative designed to link a 54-kilometer railway between the North Korean port city of Rajin and Russia’s far eastern border town of Khasan. It would allow Russia to export its products overseas through the North Korean port. If a railway is connected, Russian mineral resources can be transported by train to Rajin, where they can be shipped to South Korean ports.

Moreover, a vast transportation network extending from South Korea’s southeastern city of Busan all the way to Europe by way of Rajin and Russia could form a new logistics system linking the Korean Peninsula with the Eurasian continent.

Indeed, the project envisioned a new future for the Korean Peninsula, Northeast Asia and Eurasia.

Actually, the idea was floated long ago. North Korea’s ice-free port of Rajin served as an important bridgehead toward both the continent and the ocean decades ago, during the Japanese colonial period.

In 1991, the United Nations Development Program devised a plan to develop the Tumen River area covering Rajin and Khasan. When former North Korean leader Kim Jong-il visited Russia to meet Russian President Vladimir Putin in 2001, the two leaders signed the Moscow Declaration calling for connecting the Trans-Korean Railway with the Trans-Siberian Railway. And the first task of the plan was to link Rajin with Khasan.

It was 2008 when South Korea expressed interest in getting involved in the Rajin-Khasan project. At the time, a consortium of South Korea’s steelmaker POSCO, state railway operator KORAIL and Hyundai Merchant Marine sought to purchase a 49 percent stake in RasonConTrans, the North Korea-Russia joint venture in charge of the rail and port project.

But following unilateral economic sanctions against North Korea in response to the sinking of the South Korean warship Cheonan in 2010, most inter-Korean economic cooperation projects were suspended. It was not until 2013 that the Rajin-Khasan project was revived.

During the South Korea-Russia summit on November 13, 2013, the two sides agreed to invite South Korea into the Rajin-Khasan project. Russia sought to integrate the Eurasian continent as one economic community under its “New Eastern Policy,” while South Korea hoped to establish peace on the Korean Peninsula under the so-called “Eurasia Initiative” by inducing North Korea to open its society.

In fact, the three-way logistics project was designed to benefit all the involved countries—the two Koreas and Russia.

South Korea’s largest steelmaker POSCO imports a great amount of bituminous coal. If it imports 100-thousand tons of coal from Russia, for instance, it needs to carry them in containers. KORAIL would be in charge of transporting them by train. And Hyundai Merchant Marine could deal with the shipment of the coal from Rajin port to South Korea’s southeastern port of Pohang. So, the three South Korean firms all have their respective roles.

North Korea, meanwhile, could charge fees for using its Rajin port as well as its rail tracks. And Russia could secure another channel to export its mineral resources. In short, the three nations all stand to benefit from the project.

For some South Korean companies, the project could reduce logistics costs by 10 to 15 percent. North Korea can collect transit fees and generate jobs, while Russia secures a reliable export channel.

Most of all, transportation of goods via North Korea may properly guide the communist state to openness and economic cooperation with the South, and eventually contribute to improving cross-border ties.

For these reasons, South Korea exempted the project from sanctions placed on North Korea in 2010. A South Korean inspection team visited North Korea in February 2014 to carry out an on-site examination of Rajin port as well as railway facilities. In July, another field survey was conducted for a business feasibility study.

And in November 2014, South Korean companies held the first pilot operation of the project. 40,500 tons of Siberian coal were transported from Khasan to Rajin on a 54-kilometer railway and then shipped to Pohang port in South Korea on a Chinese vessel.

It marked the first time that Russian coal was shipped to South Korea through North Korea since the peninsula was divided. The coal was used at POSCO’s steel mill in Gwangyang off the southern tip of South Korea.

POSCO, which imports more than one million tons of bituminous coal from Russia each year, was able to reduce logistics costs through this project. For the second pilot run of the project in April 2015, the company increased the shipment to 150-thousand tons, three times more than the first shipment. And for a third shipment n November, the company examined the possibility of two ships docking at Rajin port simultaneously.

The Korean firms were satisfied with the results of the three rounds of test operations, and they started to examine ways to negotiate an official contract. The following year, however, the project moved in an unexpected direction.

North Korea carried out its fourth nuclear test in January 2016 and launched a long-range ballistic missile the following month. The provocations led the U.N. Security Council to pass Resolution 2270, which expanded sanctions on the North. Under those circumstances, then-South Korean President Park Geun-hye decided to suspend the Rajin-Khasan project and cooperate with the international community on North Korea-related issues.

In March 2016, two weeks after the U.N. Security Council adopted a resolution that imposed tough economic sanctions on North Korea, the Seoul government came up with its own sanction measures against the North. As a result, the Rajin-Khasan project came to a halt.

But rapid progress in inter-Korean relations this year raises hopes that the project may possibly resume.

I believe this project is worth trying. It’s time for Korea to advance into Eurasia. From a logistic point of view, the Rajin-Khasan project is an attractive business. I think the Moon Jae-in government considered this when formulating its “new economic map” for the Korean Peninsula. One of the axes of the map is the eastern coast belt, which certainly includes Rajin. It is important to create an appropriate environment to push for this promising project.

Unfortunately, sanctions on North Korea are the biggest stumbling block for now. Once the sanctions are eased or lifted, I’m sure the two Koreas will be able to carry out the project successfully.

Following the two Korea’s joint survey of North Korean rail tracks that started on November 30, there are rising expectations the Rajin-Khasan project may resume. Without a doubt, the project shows is a step towards the Korean Peninsula growing into a regional logistics hub.

(Next week, we’ll talk about the Korean Council for Reconciliation and Cooperation, which held a joint inter-Korean event at Mt. Geumgang this year.)