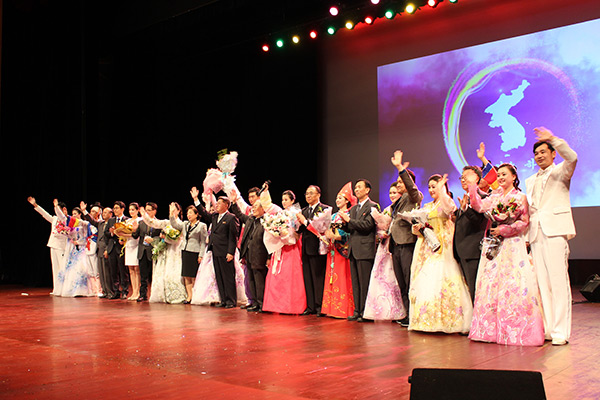 On November 3 and 4, North Korea’s Mt. Geumgang was filled with hundreds of visitors from both South and North Korea. The two-day event was jointly held by a South Korean civic group called Korean Council for Reconciliation and Cooperation and its North Korean counterpart of the same name.

It marked the first time in ten years that a private inter-Korean event was held at the North Korean mountain. The two groups have not hosted an event since the shooting death of a South Korean tourist in 2008 that led to the indefinite suspension of all South Korean tours to the resort.

Today, we’ll follow the footsteps of the Korean Council for Reconciliation and Cooperation, a pro-unification activist group that has worked towards unification of the Korean peninsula over the last 20 years. Here’s Kim Hong-gul, chairman of the group.

This group was created by my father and former president of South Korea Kim Dae-jung two decades ago. He believed that civic groups could do a lot of things that the government couldn’t. Therefore, private-level inter-Korean exchanges were as significant as government-level ones at a time when the governments of the two Koreas lacked any form of exchange.

The late Hyundai Group honorary chairman Chung Ju-yung(정주영)’s goodwill visit to North Korea with a herd of cattle in 1998 and the launch of the Mt. Geumgang tour program the same year had the same purpose of building mutual trust between the two Koreas through civilian exchanges.

In June 1998, North Korea launched the Korean Council for Reconciliation and Cooperation with an aim to facilitate contact and cooperation among pro-unification groups on the peninsula and overseas. On August 15, the North suggested the two Koreas hold a joint festival celebrating national reconciliation and unity.

On September 3, then-South Korean President Kim Dae-jung responded with the South’s own Council for Reconciliation and Cooperation, which would serve as a new dialogue channel with North Korea.

Kim demonstrated a strong commitment to and expressed high expectations for the pro-unification group. Up to that point, government-led inter-Korean events had a poor track record. Thus, it was hoped that civilian exchanges would help overcome political brinkmanship and help improve cross-border ties.

Group members from several parts of civil society carried out a variety of joint events with North Korea towards realizing inter-Korean peace and reconciliation. The group continued with its activities even when South-North relations remained icy at the top.

When North Korea was hit by heavy rain and flooding in 2011, the group provided cooking flour to the North. Flour shipments had been suspended after North Korea shelled the South Korean island of Yeonpyeong the previous year. When the North was struck by more floods in 2016, the group sent relief goods to the North by way of China, despite objections from Seoul.

The former chairmen of the group firmly believed in South-North exchanges and peace on the Korean Peninsula, so they all did their best to find a breakthrough in difficult situations. Thanks to their commitment, the group was able to overcome difficulties and build trust with the North.

Over the last two decades, the group has promoted inter-Korean communication and reconciliation at the private level. Celebrating the 20th anniversary this year, the group is formulating a new vision for the future.

Thus far we’ve conducted various North Korean aid projects, but I think it’s time to raise inter-Korean exchanges to a higher level. It’s hard to say that the situation is improving in North Korea, but the North now hopes to carry out projects that will produce results over the long term, rather than simply receive humanitarian aid from the South or engage in one-time events. I think we need to change our way of thinking now. We’re examining some joint projects that will prove mutually beneficial for both Koreas.

Kim was chosen as chairman last year. During the commemorative event celebrating the group’s 20th anniversary on September 3 this year, he proposed a new campaign called “New Bridge for Peace on the Korean Peninsula.”

The movement calls for both Koreas to conduct a campaign for the peaceful unification of Korea based on the Panmunjom Declaration adopted at an inter-Korean summit in April this year. This means cross-border exchanges will take a step forward from South Korea’s previous humanitarian aid for the North and the two Koreas will build a new bridge of peace and common prosperity together.

Kim made a four-day trip to Pyongyang this past July, and dicussed with his North Korean counterpart Kim Yong-dae the issue of Korean victims of forced labor during Japan’s colonial rule of Korea in the first half of the 20th century. The two sides agreed to organize a joint committee on this matter and work together for the repatriation of the remains of victims from Japan.

They also promised to continue to hold civilian exchanges, including the two groups’ joint event in the coming fall. They made good on the promise, as they held a two-day joint event at Mt. Geumgang early last month. On the first day of the event on November 3, delegations from the two sides talked about exchanges in six areas: religion, labor, women, agriculture, students and education. On the second day, visitors from both sides of the border walked along Samilpo Lake together.

Kim Yong-dae, head of the North Korean Council for Reconciliation and Cooperation, is over 80 years old. The old man, dressed to the nines, walked along the steep mountain path and came all the way to the lake to greet the South Korean visitors. I was deeply impressed by his sincerity and hospitality.

It’s a shame that we, South Koreans, haven’t visited Mt. Geumgang for over a decade. It’s impossible to resume a large-scale tour program right now, due to U.N. sanctions against the North. But it is still possible to hold academic forums or training programs there. The Korean Council for Reconciliation and Cooperation in both Koreas will encourage other organizations to hold various events at the scenic mountain.

The two civic groups also agreed to hold a joint dialogue on Korean victims of forced labor during Japanese colonial rule in time for the centennial anniversary of the March 1st Independence Movement next year. The South Korean civic group’s efforts towards establishing peaceful ties with the North are impressive. But Mr. Kim says that it is just the beginning of a better inter-Korean relationship.

My father made the first-ever inter-Korean summit happen and won the Nobel Peace Prize as a symbol of peace on the Korean Peninsula. I imagine he would be immensely happy to see the renewed peace efforts today. He would still believe in a peace regime on the peninsula and economic growth caused by greater inter-Korean integration. To prepare for this, we’ll contribute to various cross-border exchanges, including economic cooperation programs. To show that Korea will expand its economic outreach to the northern region in the near future, we’re considering holding an event of running a train from Seoul to China or from China to Seoul via North Korea, once the rail connection issue is resolved.

This year, inter-Korean relations entered the phase of reconciliation and cooperation. Starting with the PyeongChang Winter Olympics, South and North Korea have carried out bilateral exchanges in culture, art and sports, and the leaders of the two Koreas have met three times. Seoul and Pyongyang resumed the reunions of separated families for the first time in nearly three years and took a series of measures aimed at reducing military tensions. In the meantime, this civic group is building a strong bridge of cross-border exchanges, leading ongoing peace efforts at the private level.

(Next week, we’ll talk about the inter-Korean joint excavation of Manwoldae in Gaeseong, where the remains of the royal palace of the Goryeo Kingdom once stood.)