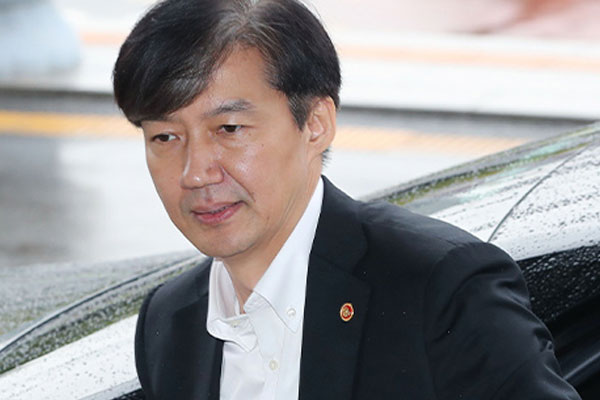 Amid mounting allegations of misconduct surrounding and his family, Moon gave a rare televised public address following the appointment ceremony to reaffirm his confidence in as the right person to complete his administration's drive to reform the country's judiciary and the prosecution.

“In the case of justice minister nominee Cho Kuk, there was much heated debate over whether he should be appointed amid a number of allegations against him and with his wife even indicted. I couldn’t help but be deeply concerned as president that the situation surrounding could divide the people. However, I came to conclude that maintaining principles and consistency is more important. With all proper procedures, including a confirmation hearing, having been met, it would have become a bad precedent if I had chosen not to appoint when the allegations around him have yet to be fully confirmed.”

The appointments come after a month of partisan bickering over Cho’s suitability as minister.

The prosecution has launched a full-fledged investigation into the allegations and indicted without detention Cho's wife for allegedly forging a school award to help her daughter gain entry to a medical school.

Addressing concerns about how Cho's appointment would affect the prosecution's investigation into Cho's family, Moon said if the minister and the prosecution both do their jobs, it would demonstrate democratic progress.

“I had made it clear in nominating that he, as somebody who as my aide pursued with me the reform of agencies of power and produced results, would be fit to conclude the reform effort. I believe that determination of mine must not be hampered. In this regard, I ask for the people’s deep understanding and support. I am aware that it could be difficult for the prosecution to smoothly conduct its probe and for to carry out his new duties while his family is under investigation and some figures already indicted. I am aware of the concerns. However, the prosecution has clearly shown through its actions that it’s determined to conduct a thorough probe. I believe that if the prosecution does what it has to do and the minister does the same, such efforts would lead to progress in revamping agencies of power and advancing democracy.”

also apologized for appointing six out of seven officials without receiving hearing reports from the National Assembly, suggesting the parliamentary process may not be fulfilling its objective to select highly qualified personnel.