COVID-19 Continues to Spread in S.Korea 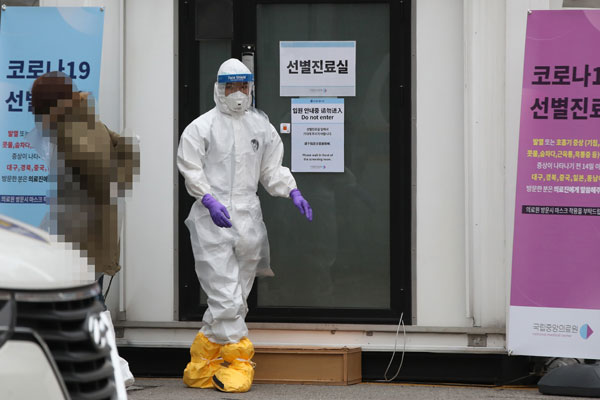 "Citizens of Daegu and North Gyeongsang Province, stay strong. We can fully overcome this COVID-19 and we will."

President Moon Jae-in visited the southeastern city of Daegu, which has become a hotbed of coronavirus cases in South Korea.

Flanked by his health minister and other Cabinet members, President Moon held an emergency meeting with the mayor of Daegu and other key officials, and promised victory against COVID-19.

"Pooling national capabilities, the government will win the fight against the virus with Daegu and North Gyeongsang Province. The government has dispatched military and police personnel as well as civilian medical staff to activate a pan-national support system."

Moon stationed Prime Minister Chung Sye-kyun in the city to lead the quarantine operations there.

"What matters is time and speed. We must create a decisive turning point in the rising trend of infections. Starting from this evening, the prime minister will be stationed here to take the lead in field efforts as the head of the central disaster relief headquarters."

Moon also attempted to resolve misunderstandings stemming from the use of the Korean word for "containment" during an earlier meeting between presidential, government and ruling party officials, which led people to suspect the government might lock down the city of Daegu.

While agreeing to take "maximum containment" steps in the virus-stricken southeastern cluster, the three groups also decided to create an extra budget for tackling COVID-19.

The budget will be used to support Daegu and the surrounding areas as well as small and medium-sized enterprises(SMEs), small business owners and exporters who have been hit hard by the outbreak.

On Friday, Finance Minister Hong Nam-ki announced that the South Korean government will submit to the National Assembly in the following week an extra budget bill totaling more than six-point-two trillion won needed to tackle the coronavirus outbreak.

Hong said the extra budget will be greater than that during the 2015 MERS outbreak, which totaled six-point-two trillion won.

Later on Friday, President Moon Jae-in met with the chairs of the four ruling and opposition parties at the National Assembly and called for the swift parliamentary passage of the supplementary budget plan.

Moon told the political leaders that he came to seek nonpartisan cooperation to contain the virus, which he described as a grave threat to both public safety and the economy.

Noting the outbreak was already starting to take a significant toll, he called on them to help prevent further economic damage. The president cited his own experience of leading efforts to pass an extra budget bill during the 2015 MERS outbreak as the former leader of the New Politics Alliance for Democracy, the predecessor of ruling Democratic Party(DP).

With regard to current countermeasures, President Moon said his administration has been utilizing all available resources to contain the disease, while also recognizing active help and support from the public and political circles.

He assured the country will overcome the virus outbreak by working together.