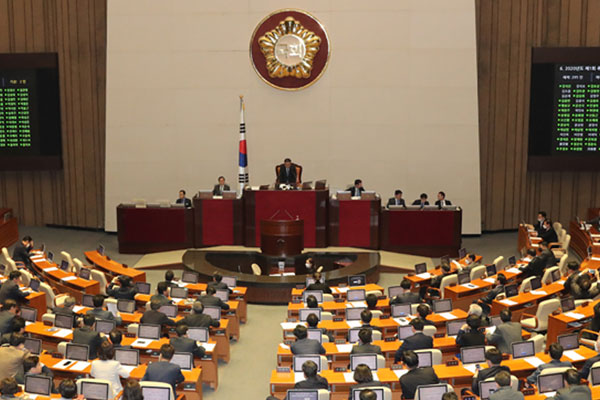 The National Assembly approved an 11-point-seven trillion-won extra budget on Tuesday to help contain the novel and cope with the economic fallout from the outbreak.

The budget will go toward supporting the hard-hit southeastern city of Daegu and neighboring North Gyeongsang Province as well as for struggling small businesses and self-employed people. It will also be used to strengthen infectious disease response capabilities and assist budget airlines.

The parliament held a plenary session to pass the budget bill just 12 days after it was submitted by the government.

The increasing economic impact of COVID-19 justified the need for such a rapid response. The extra budget is mainly focused on providing support for individuals and companies hit hard by the pandemic.

Lawmakers cut some expenditures unrelated to the outbreak and instead increased funding for Daegu and North Gyeongsang Province by more than one trillion won an estimated total of two-point-four trillion won.

Funding also increased for small businesses and the self-employed whose livelihoods are at risk, while part of the budget was allocated to help stabilize corporate management and expand loan provisions with extra low interest rates.

The budget to sharpen the country's infectious disease response capability has also increased, including for the supply of specially designed sickbeds.

Incentives will also be given to face mask manufacturers to encourage operations through the weekend to increase the mask supply, while lawmakers allowed the use of emergency funds to provide masks to vulnerable citizens for free.

The extra budget also includes aid for low cost airlines and families struggling with childcare as daycare centers and schools are closed.

The government seeks to execute three quarters of the new budget over the next two months as it believes addressing the COVID-19 fallout is a matter of timing.

The pandemic is spreading worldwide at a rapid pace, paralyzing economies and throwing financial markets into turmoil.

South Korea is highly dependent on exports and is considered one of the countries to be most affected by the outbreak which necessitates particularly swift response measures.

Some observers say the extra budget and the central bank's rate cut are still not enough to cushion the economic impact, raising the need for another supplementary budget.

President Moon Jae-in has also hinted at the possibility, saying the extra budget is not an end but a beginning. Secondary and tertiary measures may become necessary if the current situation is prolonged.

However, the Finance Ministry is against the idea for now.

Discussions on a disaster-related basic income for every citizen are also gaining attention. The ruling party is so far negative about the idea, but talks could accelerate on COVID-19 developments.