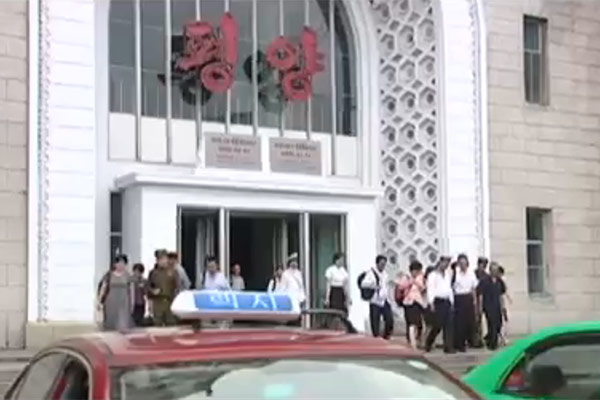 The 2019 Pyeongchang International Peace Film Festival was held from August 16th to 20th in Pyeongchang, Gangwon Province, where the Winter Olympic Games took place last year. Eighty-five films from 33 countries were shown during the five-day event, with North Korean movies drawing special attention from audience members. The North Korean films included the opening film entitled “Birds” as well as “Thaw of Spring Day” and “The Other Side of the Mountain.”

In today’s installment of Inside North Korea, we’ll learn about how North Korean movies are produced and what they are like with Professor Jeon Young-seon from the Institute for the Humanities and Unification at Konkuk University.

The first North Korean movie was made in 1949. A major change in North Korean culture and art in the 1970s had to do with a shift in the power structure in the nation. From 1958 to the late 1960s, the communist state strengthened one-man leadership centered on Kim Il-sung through purges of alleged factionalists. Afterwards, North Korea earnestly carried out projects to establish a monolithic ideological system in politics, economy and culture. Culture and art, including cinema, took the lead in idolizing Kim Il-sung.

In the 1970s, the nation began to produce films featuring the theme of the leader’s anti-Japanese struggle during the Japanese colonial rule of Korea. North Korea defines the 1970s as the period of revolution in culture and art.

The North Korean regime was founded in September of 1948 and its first film “My Homeland” was produced the following year. Former leader Kim Il-sung established unitary, one-man rule through the official state ideology of juche or self-reliance in the 1970s, and the nation began to make films aimed at bolstering the cult of personality for Kim and his family.

Kim Il-sung’s son Kim Jong-il, who was known as a film enthusiast, used movies as a tool for political propaganda while working at the Propaganda and Agitation Department of the Workers’ Party in the late 1960s. He wrote a treatise on film titled “Theory of Cinematic Art” in 1973 and instructed that all movies should be produced under the guidance of the authorities.

Just as the economy is centrally planned in North Korea, culture and art are also planned by the state. The Propaganda and Agitation Department of the Workers’ Party make plans for films first and film studios produce the movies. The films are distributed to people by the Culture Ministry.

The purpose of filmmaking is clear. Movies are used to quickly deliver the party’s policies to the people. After watching the films, people learn more about the policies at regular meetings.

In North Korea, all films are made by the state. The North argues that Kim Il-sung’s achievements are so great that it is simply impossible for an individual to describe them properly. North Korea strengthened the role of the two major film studios—the Korean Art Film Studio and the April 25 Film Studio—and set up the Mt. Baekdu Creation Group in charge of portraying the nation’s supreme leader through films.

North Korean residents must watch movies that mostly deal with war heroes and the typical themes of Kim Il-sung’s revolutionary activities. Flicks in the socialist state are generally focused on promoting the party’s ideology and the superiority of the regime rather than depicting the inner world of people or artistic values. Professor Jeon now explains the unique characteristics of North Korean films.

Many films revolve around a lead character growing up mentally. For example, a young boy obeys the party but does not understand it very well at first. But after being inspired by an exemplary friend or party member, the boy grows up to be a genuine party member.

North Korean films are usually made up of many episodes. Of course, there are serial movies in other parts of the world. But North Korean ones consist of a lot more parts. For instance, each episode of a 100-part film titled “Nation and Destiny” has a consistent theme and plot. Naturally, the large-scale films are produced with a long-term plan, and this is what makes the North Korean film genre very unique.

North Korea uses movies as a means of teaching people. Most films stress the importance of contribution and dedication to the party through characters who grow up as decent party members.

Another distinctive aspect about North Korean movies is that numerous episodes comprise one large serial film under the same main theme.  In one such film, “Nation and Destiny,” part one to part four form one series to portray a legendary general, and part six to part nine make up a different series to tell the story of another famous figure. Films with one main theme and multiple sub-themes are made to underline the continuity of the revolution.

Since North Korean movies are produced as serials, the number of viewers, which is the standard for box-office success in other countries, is not important.

In many cases, North Korean residents are required to watch serial films. North Korean statistics show that the total number of viewers who have watched a ten-part movie called “The Star of Korea” amounts to 120 million. Obviously, one person saw different parts of the film separately, meaning that they saw the movie under the same title several times.

As North Korean films concentrate on propaganda, the subject matters are quite limited.

North Korea lacks some movie genres that are pretty common in other countries. For example, North Korea does not make fantasy films like “Harry Potter,” even if it can, because they are unscientific. Something fantastic cannot be the theme of a movie in the socialist North, which puts great emphasis on science. Also, a robot cannot appear as a lead character in movies, like in “Transformers,” as North Korea believes that it is humans who make history and that only a human can be a main character in a film. It is also hard to find horror or action flicks in North Korea.

The point is, North Korea does not regard movies as a result of art or creativity but produces them for a clear purpose. So, it is difficult to promote films that do not serve that purpose.

In North Korea, there are no films describing crimes or criticizing contradictions in society, because the nation defines itself as a perfect society.

Despite the restrictions, however, films are popular among North Korean citizens. The Pyongyang International Film Festival, which is held every two years, is a rare and great opportunity for North Korean people to watch foreign movies, and scalper’s sell tickets as high as ten times the original price.

Some analysts hope that the growing public interest in movies may bring about a change in North Korean society, especially amid the winds of openness that have blown in the nation under the rule of current leader Kim Jong-un. Many may be wondering if North Korean movies can get rid of their rigid, inflexible elements.

It will be very difficult for North Korean films or music to change their content, although they may achieve technological development in the short term. I think there are still some restrictions in films produced in countries dominated by a particular religion or ideology, such as Buddhist countries or Middle Eastern nations. North Korea could be understood in this context.

In the past, North Korean films were associated with war or one-man leadership propaganda. But these days, movies in North Korea deal with family love, kind neighbors, hopes and dreams. North Korean residents can even watch Chinese flicks starring famous actors or actresses.

Even so, films are not entertainment but a means of political propaganda in the North. As long as the regime maintains the current system, North Korean movies are unlikely to go beyond the boundaries of socialist propaganda.