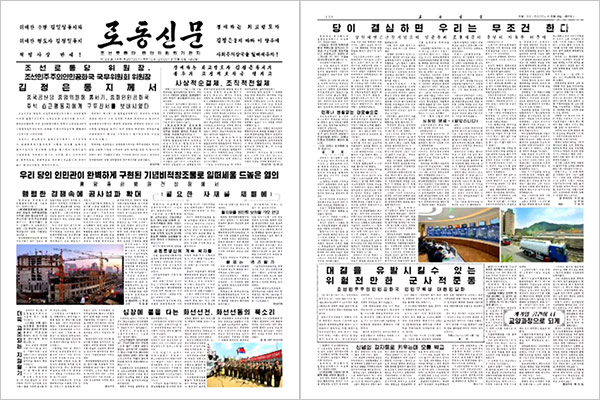 We learn news stories about North Korea, mostly from the Rodong Sinmun, which is the organ of the ruling Workers’ Party and the most influential newspaper in the country. We can’t help but wonder if there are other papers in the North. Today, we’ll learn about newspapers in North Korea from Professor Chung Eun-chan at the Institute for Unification Education. First, Professor Chung explains the Rodong Sinmun newspaper in more detail.

The Rodong Sinmun is North Korea’s premier news outlet that deals with the leader’s policies and the country’s situation overall. It was first published on November 1, 1945. It issues 1.5 million copies each day, and it has two different editions for domestic and international audiences. In the six-page paper, the first two pages regularly carry stories related to the top leader, an editorial and personnel changes. Page 3 is about economic news both inside and outside the country, as well as the successful results of party policies in political, economic, social and cultural areas. Page 4 covers articles about arts and culture. Page 5 and 6 are dedicated to stories about South Korea and unification as well as international news.

North Korea’s second official newspaper is the Minju Chosun, which is translated as “Democratic Korea.” It is published six days a week from Monday through Saturday. It contains four pages, but the Tuesday and Friday editions have two more pages. While the Rodong Sinmun handles the party’s philosophy and policy direction in a broader context, the Minju Chosun deals with more detailed, administrative matters, such as how to implement party policies.

Professor Chung now tells us about various other papers in North Korea.

North Korea has three main national newspapers—the Rodong Sinmun, the Minju Chosun and Chongnyon Jonwi(청년전위), which is literally translated as “youth vanguard.” In addition, cities, provinces, party committees and the Korean People’s Army publish their own papers. A weekly English-language paper called the Pyongyang Times presents news and propaganda to an international audience. North Korea’s Cabinet has 44 divisions, including ministries. The Ministry of Railways, the Ministry of Construction and Building Materials and the Education Commission issue their respective papers. So do local factories, enterprises and colleges. The papers are published every other day or weekly, and they have a limited circulation.

North Korean newspapers are rather thin, as they have fewer pages, compared to their South Korean counterparts. With a clear purpose of promoting the authorities’ policies and instructing people, they exclude articles critical of society as well as stories related to accidents, crimes and disasters. Slight changes are being perceived in the newspapers these days, but their format and content are pretty much the same now as in the past. Professor Chung explains the characteristics of North Korea’s news reports.

All newspapers in the North put top priority on the interests of the labor class, the public and the party policies. They also stress the need for implementing party policies sincerely and aggressively. In editing, the newspapers categorize all articles into about 30 types. They include an editorial clarifying the policies and important political and social issues, and an easy explanation of a joint New Year editorial that outlines the top leader’s guidelines and the country’s policies for the year. Essentially, the purpose of the newspapers is to instill party policies into the general public and mobilize people to implement them, rather than to deliver news to readers quickly and accurately.

In South Korea, people can choose newspapers they want to read, in consideration of the papers’ particular views and tendencies. The newspapers are also delivered to just about anywhere every day. In North Korea, on the other hand, newspapers do not vary, and not everyone can easily receive them at home or the office. North Korean papers mostly serve as the mouthpiece of certain organizations, and they are only delivered to high officials who hold particular positions. For that reason, North Korean newspapers do not need to compete with other papers and worry about circulation or profits. There are no newspaper ads, either.

North Korean newspapers, including the Rodong Sinmun, do not have a classified ads section. First of all, the number of pages is too small to contain any ads section. If the leader visits a department store or a restaurant in his field guidance, the places could be introduced in the newspapers. In a sense, that might be a form of indirect advertisement. Of course, it is nothing like South Korean companies’ practice to pay for ads in newspapers.

In North Korean newspapers, the text is written horizontally and no Chinese characters are found. English words are rarely used, as North Korea refrains from using foreign expressions, in principle. Typically, the Ming-style font is used. But the name of the leader is highlighted in bold type, and what he said is written in Gothic type so it can stand out clearly.

Some may think that North Korean newspapers are not very popular with local citizens, as they mostly promote party policies and do not include interesting stories. Contrary to the expectations, though, many North Korean residents read newspapers diligently. That’s because the papers serve as a channel through which they can learn what’s happening in the world. Also, they have few other options to read.

The monthly subscription fee for the Rodong Sinmun is about 25 cents. Newsstands are installed at bus stops, subway platforms and the entrance of apartment buildings. So, what articles do local people prefer to read?

In the North, Internet access is limited and it is difficult to learn about outside information through TV. So, those who are interested in news about South Korea and other countries carefully read the fifth and sixth pages of the Rodong Sinmun. They don’t really pay much attention to the first two pages that typically repeat political explanations. Some people read the main newspaper as its articles are sometimes used as learning materials in their workplaces. The newspaper strongly criticizes South Korea, highlighting the dark side of society and human rights abuse, and praises the superiority of North Korea’s socialism instead. Local residents are exposed to many articles that are dedicated to revealing the absurdity of a capitalistic society.

In North Korea, it is difficult to access to the Internet service. Also, local citizens who listen to foreign radio broadcasts are subject to monitoring. North Korean authorities strictly control the people in a way that they get information only from the domestic media. That’s why the role of newspapers is important.

We hope North Korean residents, just like people in other parts of the world, will soon be able to read various news stories accurately and promptly through local newspapers.