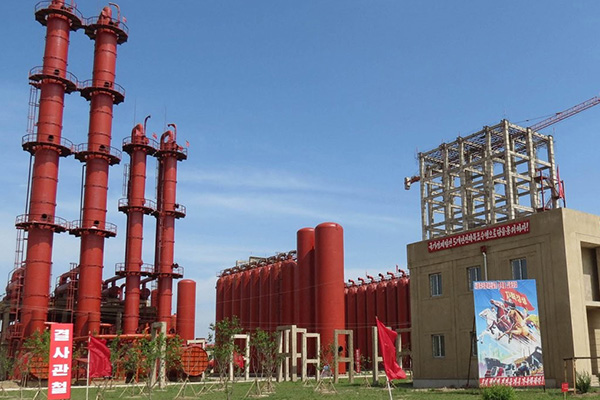 On August 25, North Korea’s new premier Kim Tok-hun and vice chairman of the State Affairs Commission Pak Pong-ju visited the construction site related to the development of a coal gasification project known as the C1 chemical industry. During a politburo meeting presided over by leader Kim Jong-un in June, one of the major topics was how to quickly complete the establishment of this industry. The C1 chemical industry has often appeared in North Korea-related news as of late, indicating that the industry has emerged as a state priority. Here’s Dr. Bong Young-shik from the Yonsei Institute for North Korean Studies to explain.

Pak Pong-ju and Kim Tok-hun are North Korea’s top two economic officials. The recent joint inspection tour of these officials shows that the Kim Jong-un regime has high expectations for the C1 chemical industry and made a big investment in it.

The C1 chemical industry is one of the key policies to achieve “self-reliance,” which North Korea has placed great emphasis on. So, what exactly is the C1 chemical industry? “C” here means carbon, and C1 chemistry refers to the use of gasification of coal to produce synthetic gas with carbon monoxide and hydrogen, with the synthetic gas used as the basis for manufacturing various chemical products. Dr. Bong explains C1 chemistry in more detail.

C1 or one-carbon chemistry involves the conversion of simple carbon-containing compounds, such as carbon monoxide, into organic compounds consisting two or more carbon atoms. North Korea’s ruling Workers’ Party believes the C1 chemical industry will save energy and labor. North Korea is rich in anthracite coal and brown coal. The North’s anthracite deposits are the fourth-largest in the world. Through the gasification of coal, C1 is produced. Together with hydrogen, it becomes methanol. Methanol then serves as the precursor to organic compounds such as ethylene and propylene. They are used as feedstock to produce gasoline, synthetic fiber, synthetic resins, synthetic rubber, agricultural pesticides, paints, medicines and chemical fertilizer. Simply put, a variety of chemical products and oil can be produced from coal.

North Korea is putting so much effort into C1 chemistry in order to overcome the difficulties in securing oil supplies amid international sanctions.

Under the U.N. Security Council Resolution 2397 adopted in 2017, the annual amount of refined oil exported to North Korea cannot exceed 500-thousand barrels. Reports say that following the U.N. sanctions, the amount of refined oil North Korea can import from China or other countries has reduced by one-third. 500-thousand barrels are considered a very small amount, and North Korea suffers from a severe shortage of energy. Even in the capital of Pyongyang, the government provides electricity for three hours a day, one hour shorter than before. North Korea also finds it difficult to operate plants of chemical fertilizer due to the shortage of electricity. Under the harsh international sanctions and economic difficulties, North Korea seeks to develop the C1 chemical industry in a desperate attempt to diversify its energy sources.

The basic principles of C1 chemistry were invented in Italy in 1788 but it was actually used for industrial purposes in the late 19th century. It made little progress, though, giving way to petrochemistry. The oil crisis in the 1970s put C1 chemistry in the spotlight, but it lost popularity in the era of low oil prices. It has drawn attention again as of late as a means of resolving the problem of global warming. But limitations still remain due to its high-cost system, compared to petrochemistry.

Compared to conventional coal chemistry, C1 chemistry can skip the process of converting coal into carbide—the process requiring a massive amount of electricity. That means North Korea can save energy by developing the C1 chemical industry. The industry has other advantages such as extracting gas from coal seams and using carbon monoxide formed during the steelmaking process to obtain raw materials at low costs. In many ways, nurturing the C1 chemical industry could mean an efficient use of North Korea’s coal assets. It seems North Korea decided to focus on this industry in order to secure refined oil and chemical products by making the most of its abundant coal.

According to the report of North Korea’s main newspaper Rodong Sinmun on August 1, the country finished plasterwork for the feedstock production facilities of a coal gasification plant in mid-July and other interior work was underway. The establishment of the C1 chemical industry is one of the tasks announced during the seventh party congress in 2016. Leader Kim Jong-un also called for greater efforts to create the industry quickly during his New Year’s speech in 2019.

While the leader has stressed the need for the industry for the sake of energy self-sufficiency in recent years, no substantial progress has been made.

During the party congress in 2016, the C1 chemical industry was listed as one of the key industrial strategies under the nation’s five-year economic development plan. But it has not produced any visible result. North Korea broke ground in May 2017 to build facilities capable of producing hundreds of thousands of tons of methanol, but they haven’t been completed yet. That means North Korea has yet to reach the level of gasoline production or chemical products from coal. The U.N. sanctions have restricted North Korea from exporting its five major items such as coal, mineral resources, textiles, seafood and labor. The local economy is deteriorating even further due to the COVID-19 pandemic.

To make matters worse, the nation experienced the longest rainy season on record this past summer, suffering from heavy flood damage. The Kim Jong-un regime is concerned that the country may experience a serious food shortage, like the one during the so-called “Arduous March” period in the mid-1990s. North Korea finds it all the more urgent to develop the C1 chemical industry. For that purpose, I think the North should invest more time.

Due to COVID-19 and typhoon damage, North Korea says it will re-examine all state projects that were initially scheduled for completion within the year. So, it is uncertain when the country will complete the establishment of the C1 chemical industry.