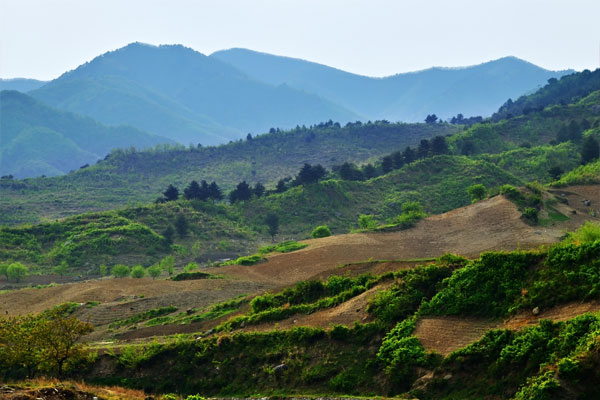 In North Korea, forests are not really associated with environmental protection. Rather, they have been regarded as a means for lumbering and earning foreign currency. But the country has been keen on reforestation since leader Kim Jong-un assumed power.

The key of the Kim Jong-un regime’s forestry policy is to restore forests under the strategic goal of building a socialist power. That is, reforestation is not simply about forest recovery but represents a strategy of using forest resources for economic development and preventing natural disasters for the protection of the ecological environment.

Forests cover 80 percent of North Korea’s total land area. It is not easy to figure out exactly how forestation activities have been carried out in such a closed North Korean society. In preparation for Korea’s unification, South Korea’s National Institute of Forest Science has been researching North Korea’s forests by analyzing satellite photos since 1999. The agency has observed forests across North Korea based on satellite imagery on a ten-year basis. Since 2014, it has biennially monitored forests in eleven important regions in terms of policy.

Satellite photos in 2008 showed that two-point-84 million hectares of the forest area in North Korea had been devastated. In 2018, the figure decreased to two-point-62 million hectares or 28 percent of North Korea’s total forests, meaning that 220-thousand hectares were restored. Still, the percentage of deforestation is high. From 1999 to 2018, forests were destroyed particularly in relatively populous western coastal areas.

Forests were severely damaged on the entire Korean Peninsula during the Japanese colonial period between 1910 and 1945. From 1945 to 2020, South Korea’s growing stock, which refers to the volume of timber in living trees, increased by 14 times, while North Korea’s only grew two-point-nine times.

South Korea successfully restored forests in the 1970s, but the North focused on timber production until the 1980s which destroyed the forests. Deforestation accelerated further in North Korea during the harsh period of economic difficulty known as the Arduous March in the 1990s.

South Korea’s forests entered a stable phase in the late 1990s, thanks to the country’s successful reforestation in the 1970s. North Korea, on the other hand, saw the rapid degradation of forests, due to the protracted economic difficulty, energy shortages and the food crisis.

In the 1990s, local residents suffering from economic hardships cut down trees to earn money and secure fuel for heat and cooking. The food crisis during the Arduous March period led to the rampant conversion of forests into terraced paddies on hillside slopes for food production.

Maplecroft, a risk analysis firm based in the U.K., said in 2011 that North Korea had the third highest deforestation rate among 180 countries, following only Nigeria and Indonesia.

According to Global Forest Watch, a global monitoring service, more than 200-thousand hectares of forests disappeared in North Korea from 2001 to 2019, mostly in its Ryanggang, Jagang and South Hamgyong provinces. In other words, the country lost a forest area the size of 330-thousand soccer fields in two decades.

The severe loss of trees in North Korea led to major natural disasters and huge damage.

North Korea has constantly suffered from floods and droughts caused by deforested mountains. The country’s devastating flood in 1995 is included in the top 50 worst natural disasters in the world.

According to data of the Center for Research on the Epidemiology of Disasters—a World Health Organization Collaborating Center—North Korea saw 538 deaths in a flood in 2016. It is the third highest number in terms of disaster mortality that year, trailing Ecuador and Haiti, which were hit by an earthquake and a hurricane, respectively.

In its voluntary national review submitted to the U.N. in 2021, North Korea admitted that it is vulnerable to extreme weather events, noting that one or more natural disasters have occurred in the country every year over the last decade.

North Korea recognizes the gravity of its bare mountains and shows interest in forest restoration. Since 2003, during the reign of former leader Kim Jong-il, North Korea implemented agroforestry in some regions to protect forests and ensure economic benefits for residents as well. It is one of the country’s representative forestry policies aimed at recovering forests.

North Korea initiated the agroforestry project in 2003 at the recommendation of the Swiss Agency for Development Cooperation. Agroforestry is a land management system, where trees and crops are planted and grown together in the same place. The combination of agriculture and forestry has multiple benefits, such as forest recovery and food production.

Current leader Kim Jong-un has emphasized the need for reforestation since the early years of his rule. In 2015, he made a statement titled “Let’s carry out a forestation campaign in earnest and make green forests thick on the mountains of our country.” The leader pointed out that trees had been cut randomly for food and firewood since the Arduous March period resulting in a drastic decrease of valuable forest resources. He then stressed that the country should not pass the treeless mountains on to the future generation.

Kim Jong-un instructed a reforestation campaign and declared war on deforestation. North Korea actually uses a Korean word meaning “battle” to refer to the “campaign.” The military expression shows that the country was so desperate for forest restoration, like winning a war, wishing to make its mountains green again. When translating the word “battle” to English, though, the North used “campaign,” probably because words like “battle” or “fight” might cause listeners to mistakenly believe the North would destroy forests. It seems North Korea chose the word “campaign,” taking its global image into consideration.

In the statement, Kim Jong-un said the party is firmly determined to turn all the mountains in the country into golden treasure mountains, thickly wooded with trees, within the next ten years. The phrase “golden mountains” has since appeared in local media frequently.

On March 2, this year’s Tree Planting Day, the Rodong Sinmun newspaper said in its editorial that forestation is a political project to turn all the mountains into useful golden treasure mountains and transform the country into the people’s paradise. Apparently, the phrase “golden mountains” is emerging as a keyword in North Korea’s forestation policy.

Since Kim Jong-un used the expression, “golden treasure mountains,” the phrase has become a key term in the country’s forestation policy. The term “golden mountains” now means forest restoration that would contribute to economic development and an improvement in people’s lives. In this “golden mountains” strategy, forests should be restored to their original state, of course, but they should also turn into valuable mountains of economic value and facilitate the construction of a rich and powerful country. North Korea aims to transform the denuded mountains into golden mountains, that is, turning misfortunes into a blessing. Through this strategy, the North seeks to fulfill multiple purposes—restoring the forests, developing the economy and protecting the ecological environment.

In 2015, North Korea drew up a separate budget for reforestation, established a new bureau of forestation and set up tree nurseries in different regions to carry out a forestation project nationwide. In 2016, it built a forest fire observation and information service system. The following year, North Korea created a new department of forestry science at Kim Il-sung University to deal with forestry issues in a more scientific way. In addition, the North revitalized a forest management system, in which agencies and organizations are responsible for forest recovery in their regions.

Having been in place since the years of former leader Kim Il-sung, the forest management system has been subdivided, even evolving into a competition during the current leader’s rule. Under the system called “socialist patriotic forestation campaign,” individuals and households are in charge of taking care of their own trees. The Rodong Sinmun newspaper has covered stories about a furniture factory manager who successfully grew 250 young trees in his office, a son inheriting the legacy of his father who had served as a forest ranger, and an old man devoted to growing trees. The paper has also reported competitions for tree production, planting and protection as well as organizations participating in the competitions. The competitions are conducted under various other titles such as a model project and an experience-sharing campaign.

At the eighth congress of the Workers’ Party in January 2021, Kim Jong-un said that the five-year strategy for the state economic development fell far short of the expectations in almost all areas, except for 12 segments. He mentioned the achievements in the 12 areas, including forestation. North Korea even presented a specific figure, saying that about one million hectares of land were reforested. It is quite a large area, although it is difficult to confirm the result of North Korea’s forestation efforts under Kim Jong-un’s rule.

Judging from the report North Korea submitted to the U.N., it is assumed that about 780-thousand hectares of land were afforested in the country. The figure is lower than the one North Korea announced at the eighth party congress, but is still considered high. Importantly, North Korea unveiled its forestation result in specific numbers. It’s also significant that the North officially announced the result for the first time since 2015 when the country began to push for reforestation in earnest.

However, there are limitations in the country’s forest restoration, due to international sanctions and the COVID-19 pandemic. For economic recovery, North Korea may possibly provide less support for its forestation policy and invest more in agriculture and light industries instead. The North has carried out a large-scale construction project in recent years, raising speculation that it may have cut down many trees. In the recovery phases, excessive lumbering is possible. If local governments have to restore forests based solely on their own budget, the forestation campaign will produce different results, depending on the economic situation of each region.

Simply planting trees will not resolve North Korea’s deforestation problem. The country should find a fundamental solution to their food and energy issues—the main cause of depleted forests. To this end, inter-Korean exchanges and cooperation with the international community seem to be more important than anything else.

Next time, we’ll look at some of North Korea’s literary works to examine how its forestation policy has changed.