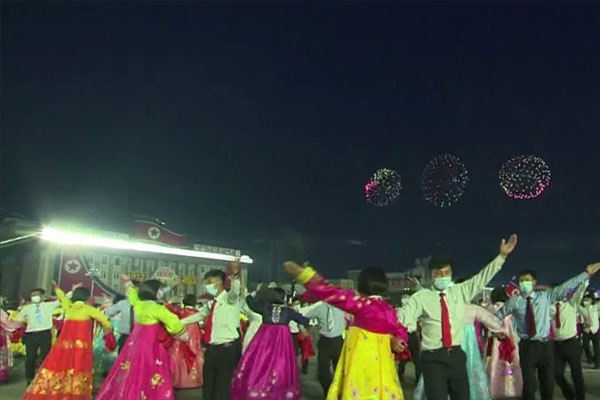 In North Korea, dances are committed to express trust and hope for the future of the socialist state, under the principle of revolutionary optimism. I was deeply impressed by the feminine yet dynamic dance movements.

Dr. Kim Chae-won is a researcher in North Korean dance as well as dances of Choi Seung-hee, a leading Korean modern dancer. Dances in South and North Korea were derived from the same root, but they have evolved in different ways since national division. North Korean dance, in particular, tends to put emphasis on form and boasts highly sophisticated techniques, characterized by fast movements as well as staccato-type dancing in the end, where each movement is short and disconnected from the other.

North Korean dance adopted many ballet techniques, and movements are speedy, light and cheerful. It rejects something abstract. Rather, it values realistic expression. North Korean dance takes ternary form or ABA, which is a sequential choreographic form with three parts. For example, a slow theme is followed by a quick theme and ends with the repeat of the first slow theme, and vice versa.

Former North Korean leader Kim Jong-il once stressed that culture and art can penetrate something that politics cannot reach and they can achieve something that guns cannot attain. It is assumed that North Korean art is used as a means of serving political purposes. Dance also falls under this category of art.

In the North, dance is used as a means of ideological education. Based on socialist realism, the so-called juche or self-reliance dance mostly features the themes of loyalty to the Supreme Leader and the Workers’ Party, admiration for their great achievements, and some heroic stories from the periods of anti-Japanese revolutionary struggle and the Korean War. The themes are focused on giving North Korean people a sense of pride in their socialist regime.

North Korean dance incorporated techniques of foreign dance into those of traditional dance to represent socialist themes. Legendary dancer Choi Seung-hee made a great contribution to the establishment of this North Korean dance system.

This is part of a dance performance by the Pyongyang Arirang Art Troupe which consists of artists who defected from North Korea. The show was held in Seoul in 2019. One of the dances unveiled at the time is called the “clinking dance,” a reinterpretation of Choi Seung-hee’s shaman dance. As one of North Korea’s representative dances, it earned the name because of clinking iron bracelets worn by the dancers.

As seen in the show, Choi’s dances have been passed on to her successors for stage performances today, although decades have passed since her death.

Choi Seung-hee was born in 1911 and studied dance under Japanese modern dancer Baku Ishii in Japan. She created dances including the monk’s dance and the shaman dance that added modern elements to classics of the Joseon Dynasty. Through her international dance tours, Choi grew to be a world-class dancer.

Choi moved to North Korea in 1946 at the recommendation of the regime’s founder Kim Il-sung. There, she founded a dance academy named after her and published a collection of dance steps titled Joseon Folk Dance Basic Steps. She made a decisive role in laying the groundwork for North Korean dance. She was purged in 1967 and died in 1969. It is said that Choi was reinstated later and her grave appeared in the Patriotic Martyrs’ Cemetery in Pyongyang.

Choi’s publication, Joseon Folk Dance Basic Steps, comprises the basics of North Korean dance. Dancers in the North all study it to start their career. Those who were trained at her academy have led the country’s dance scene since she was purged. In North Korea, there’s no dancer who does not perform Choi’s dances.

It is believed that North Korean dance has developed in line with state policies and the party’s major plans. During the Korean War, North Korea encouraged soldiers and residents through dance shows highlighting militant and inciting moves as well as the performance system with excellent mobility. After the war, dances were created for the purpose of spreading communist ideas among the public. In 1954, North Korea reopened the Moranbong Theater that had been destroyed during the war. In 1960, the country built the Pyongyang Grand Theater.

The “Winnowing Basket Dance” is regarded as the best of all the four masterpieces. It describes girls who are winnowing grains at a water mill to send them to an anti-Japanese guerilla unit.

The “Winnowing Basket Dance” is a group dance separated from part of the mill dance of a revolutionary opera entitled “Pibada” or “Sea of Blood” in English. The dance was showcased during the 2000 inter-Korean summit.

“Pibada” marked a turning point in North Korean art in the 1970s. It was completely different from any previous performing art form. Against the background of the Japanese colonial period, the opera emphasizes the inevitability of revolution through a woman who suffers from difficulties due to the Japanese. It was produced in 1971 under the instruction of Kim Jong-il.

In the Pibada-style performance, an offstage chorus called bangchang(방창) is positioned on the sides of the stage to play background songs that indirectly show the main characters’ internal feelings or explain the situation. An orchestra, dance and stage art are combined to create a Pibada-style show.

Afterwards, North Korean performing art forms began to follow the Pibada-style performance. In line with the emergence of the revolutionary opera, dance also became an essential part of performances.

Something may not be fully expressed by songs or lines on stage. To compensate this part or deliver the message more effectively, dance could be inserted during the theatrical performance. For instance, dance can show how the main character’s ideology changes or help the performance proceed.

In the dream scene of the Pibada revolutionary opera, dancers feature the image of a flower to create a dreamy atmosphere.

The military-first ideology defines the military as the driving force behind juche socialist revolution and it is committed to resolving social problems through the military. Under this doctrine, the party, the military and the people should stand together.

It is easy to understand that North Korean dance works also began to adopt military themes, with their focus shifting from workers at industrial sites to soldiers. Dances performed during the period include “Drumbeat of Victory” and “The Gun Given by General.” As seen in the titles, those dances contain political messages.

Since current leader Kim Jong-un took power, North Korean culture and art has undergone a major change. In a joint New Year’s editorial in 2012, North Korea presented a goal of building a civilized socialist state and called for all areas including culture and art to achieve that goal.

While culture and art have still been used as a means of ideological refinement, the country is believed to have taken a different approach. A change has also been detected in the local dance scene.

Under Kim Jong-un’s rule, music and dance have seen the most noticeable change. Tap dance, in particular, began to enjoy great popularity. In the past, North Korea refused to accept American culture. After Kim Jong-un came to power, however, a show featured famous Western songs including the Theme from Rocky, while Disney characters showed up on stage. One can often see pairs of dancers dancing a waltz in the North. Apparently, North Korea is boldly embracing techniques of foreign dance. It is accepting Western culture that the country had rejected before. This is one of the major changes in the Kim Jong-un era.

The Moranbong Band and the Samjiyon Orchestra also offer a glimpse into how North Korea has changed in the Kim Jong-un era. However, North Korean dance is still subordinate to politics, rather than belong to the realm of independent art. This makes us, once again, ponder the meaning and role of art.