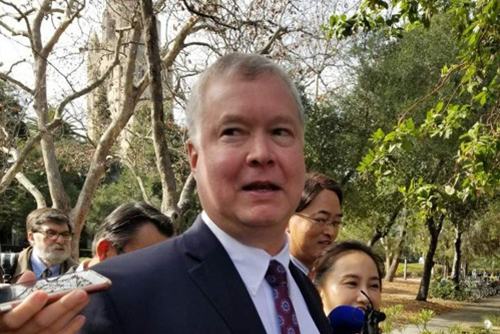 Anchor: Weeks ahead of the second Washington-Pyongyang summit expected late February, a key U.S. envoy said President Donald Trump is convinced that it is time to "move past 70 years of war and hostility on the Korean Peninsula." Washington's top nuclear envoy Stephen Biegun also said the U.S. is not interested in toppling the Pyongyang regime.
Kim Bum-soo has more.

In a speech at Stanford University on Thursday, U.S. Special Representative for North Korea Stephen Biegun said the Korean War is over and done.

[Sound bite: Stephen Biegun - US Special Representative for North Korea]
"President Trump is ready to end this war. It is over. It is done. We're not going to invade North Korea. We are not seeking to topple the regime. We need to advance our diplomacy alongside our plans for denuclearization in a manner that sends that message clearly to North Korea as well. We are ready for a different future."

This comes as Washington is getting ready for the second U.S.-North Korea summit in late February. Biegun, however, fell short of suggesting that formally declaring the end of the Korean War could be an outcome at the upcoming summit.

[Sound bite:  Stephen Biegun - US Special Representative for North Korea]
"President Trump has made clear, both to North Korea, as well as to our team that he expects significant and verifiable progress on denuclearization -- actions that are bold, and real to emerge from that next summit."

The envoy also said that North Korean leader Kim Jong-un committed to the dismantlement and destruction of his plutonium and uranium enrichment facilities during an October visit by U.S. Secretary of State Mike Pompeo. Biegun said it would be a lot more conceivable that there would be a permanent peace regime on the peninsula if the U.S. and North Korea "do the right thing on nuclear weapons."

[Sound bite:  Stephen Biegun - US Special Representative for North Korea]
"We say we will not lift sanctions until denuclearization is complete. That is correct. We didn't say we won't do anything until you do everything. But it's often it's often cast as that and that that's why an opportunity like this today is so important, to be able to maybe put a little bit more flesh on the bones."

Amid media speculations that the U.S.' pullout of 28-thousand-500 troops from South Korea might be discussed during the second Trump-Kim talks, Biegun also made it clear that the U.S. is not involved in any such discussions.

The American envoy will travel to Seoul on Sunday to hold talks with his South Korean counterpart. He will then hold another meeting with North Korean officials early next week, possibly at the truce village of Panmunjeom, to finalize details for the Trump-Kim talks later this month.
Kim Bum-soo, KBS World Radio News.
Share
Print
List