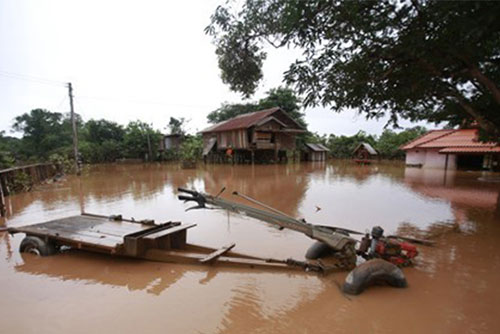 Anchor: The government of Laos says South Korean firms are to blame for last week’s dam collapse disaster, opening the door for the country to call for compensation for victims of the accident. With an investigation pending, South Korea’s government is vowing to help Laos get the area back on its feet. Kurt Achin reports.

Report: The Laos-based Vientiane Times on Thursday quoted the country's deputy prime minister Sonexay Siphandone as saying last week’s dam collapse was not a natural disaster but a man-made one.

Speaking during a meeting Tuesday to discuss response measures to the tragedy, the deputy prime minister said that the flooding was caused by a fracture in the dam.

The Laotian energy minister also says substandard construction was a key factor in the collapse of the structure which flooded nearby villages.

Thirteen people were killed, more than one hundred are still missing, and thousands have been displaced from their homes.

However the dam's builder, SK Engineering and Construction, says heavy rains are more to blame, citing over one thousand millimeters of precipitation during the ten-day period prior to the collapse of the dam.

In Singapore, South Korean Foreign Minister Kang Kyung-wha reassured her Laotian counterpart that Seoul will provide recovery support and extended her sympathy for the victims.

South Korea has already offered more than one million dollars worth of aid and dispatched a medical team of more than a dozen professionals to provide emergency care in the area affected by the collapse.
Kurt Achin, KBS World Radio News.
Share
Print
List