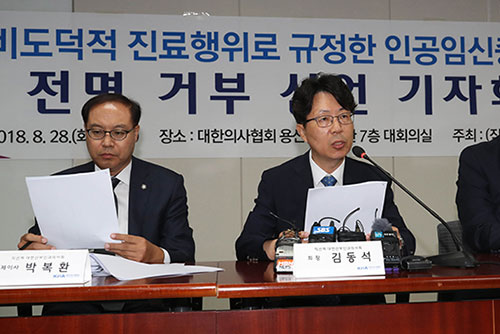 Doctors in the nation have declared they will stop performing surgical abortions.

At a news conference Tuesday, the Korean College of Obstetricians and Gynecologists protested the government's rules amendment earlier this month to suspend licenses of physicians conducting abortions for a month, labeling the practice "unethical."

The group noted that 23 out of 30 member nations of the Organization for Economic Cooperation and Development allow surgical abortions for socioeconomic reasons.

It added while numerous abortions take place behind closed doors, the latest revision is a stopgap measure that steps up punishment only against women and medical personnel.

As the Constitutional Court is currently reviewing a constitutional appeal on whether abortion is unconstitutional, the group said the government should postpone the administrative punishment until a social consensus is reached.
Share
Print
List