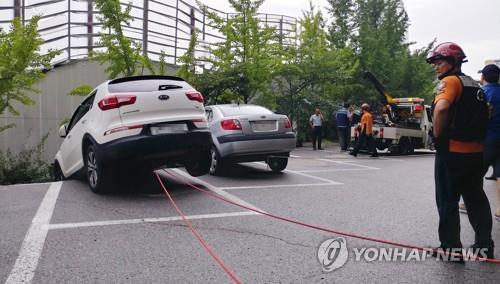 Massive land erosion next to an apartment complex in Seoul has forced some 200 people out of their homes early morning Friday.

In the wake of massive rainfall over the last few days, the sinkhole opened 30 meters wide and six meters deep, right next to a parking lot of an apartment building in the Geumcheon district in southwestern Seoul.

City officials reassured the public that there are no safety concerns for residential buildings in the area.

Authorities have so far filled the sinkhole with soil to prevent further collapse and a decision to allow the residents to return to their homes is expected to be made as early as Friday night.

The massive erosion took place at a construction site for a 30-meter high building, though workers were not on site at the time of the incident.