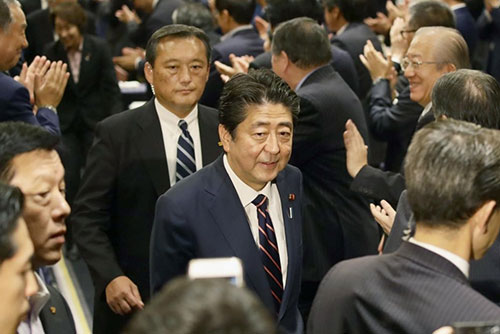 Japanese Prime Minister Shinzo Abe will reportedly attend a Japanese government event next week designed to mark the anniversary of a joint declaration on the Japan-South Korea partnership.

Kyodo News said on Friday that Abe will deliver an address at a symposium in Tokyo next Tuesday honoring the 20th anniversary of the 1998 joint declaration by then-South Korean President Kim Dae-jung and then-Japanese Prime Minister Keizo Obuchi.

According to the report, Wataru Takeshita, the chairman of the ruling Liberal Democratic Party(LDP) and chief executor of the symposium, asked Abe to attend the event and that Abe accepted the invitation.

Takeshita told Kyodo that Abe said relations between Japan and South Korea are important and they need to hold more bilateral summit meetings.

The 1998 joint declaration focused on building a new, future-oriented partnership between the two countries, and noted that Japan caused tremendous damage and suffering to the people of South Korea during its colonial rule. Obuchi also expressed his "deep remorse and heartfelt apology" for the historical fact.