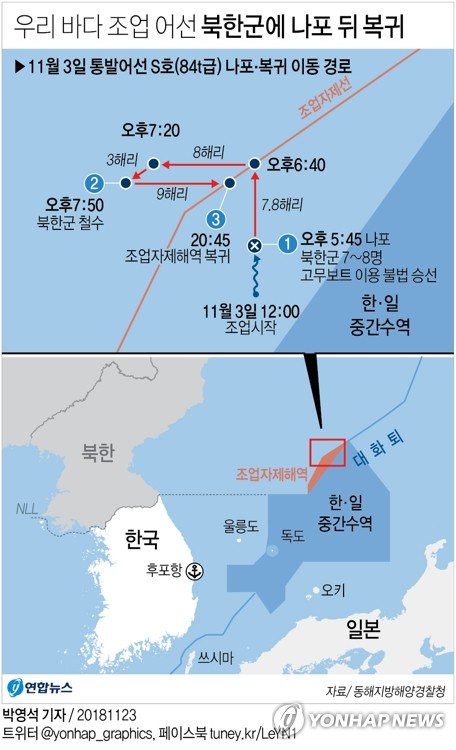 A South Korean fishing vessel was seized and then released by North Korea in the northern East Sea earlier this month.

According to the Coast Guard East Regional Headquarters, the 84-ton vessel from Hupo Port in North Gyeongsang Province was approached by the North Korean military as it was operating in waters where restraint in fishing operations is advised at around 5:40 p.m. on November third.

Seven to eight North Korean soldiers boarded the vessel, cut off its communications and took the ten crew members, including the captain, into a cabin room. The boat then traveled for two hours and crossed into North Korean waters.

The Coast Guard said that a North Korean patrol boat approached the same fishing vessel, which was operating in the area on November 15th, and issued broadcast warnings twice around 10:40 p.m.

The vessel then made its way back home and reported the incident to a fisheries communications station at Hupo Port.

The Coast Guard said that based on crew member testimonies and navigation records, the vessel is believed to have been operating in South Korean waters when it was captured by the North.
Share
Print
List