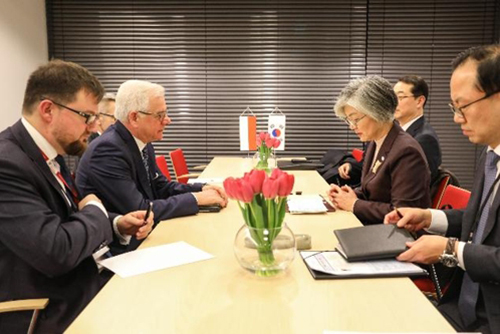 The top diplomats of South Korea and Poland discussed ways to develop bilateral ties and peace efforts on the Korean Peninsula on Thursday.

South Korea's Foreign Ministry said on Friday that Minister Kang Kyung-wha and her Polish counterpart Jacek Czaputowicz met in Warsaw on the sidelines of an international conference on the Middle East co-hosted by Poland and the United States.

The ministers agreed to further strengthen their countries' strategic partnership, forged in October 2013, as this year marks the 30th anniversary of the establishment of their diplomatic ties.

Kang expressed hope that South Korean companies will be able to participate in major Polish nuclear plant and airport construction projects and for the two sides to expand cooperation in the arms industry.