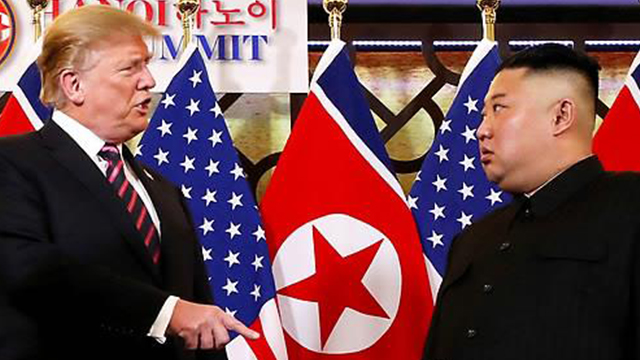 Citing sources familiar with negotiations between the U.S., South Korea, and Japan, the Yomiuri Shimbun newspaper said Saturday that Trump's proposal contained two demands from the North and three compensation measures the U.S. would offer.

The second demand Washington suggested was restarting the excavation of the remains of U.S. soldiers within North Korea.

If Pyongyang accepted these demands, Trump offered to declare a formal end to the Korean War, install a U.S.-North Korea liaison office and provide economic support.

The war-ending declaration and the liaison office would be realized only when North Korea completely dismantled its Yongbyon nuclear facility.

The economic aid was to be delivered when the North achieved complete denuclearization.

The Yomiuri report said the two sides reached a rough agreement regarding the three compensation measures and the excavation work during working-level negotiations but a breakthrough has yet to come on the issue of denuclearization.

The report said that when Trump presented the five-point proposal in English and Korean, the North Korean leader protested saying he cannot accept Washington's unilateral demands for denuclearization.

Yomiuri speculated the U.S. likely proposed the Libyan model of denuclearization which calls for handing over North Korea's nuclear materials and weapons, after which sanctions can be lifted.
Share
Print
List